What if Kim Jong-un Is Really Dead? That Could Mean Chaos. 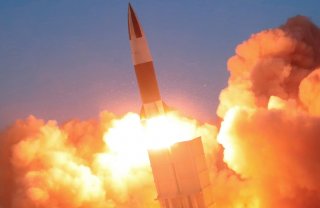 No matter what anyone claims, no one knows what is going on in North Korea.

Until Kim Jong-un either reappears hale and hearty or as part of a funeral cortege rolling through Pyongyang, everything will be pure speculation. Most North Koreans also have no idea what is going on.

There is plenty of circumstantial evidence that something is wrong. However, the South Korean government is pushing back strongly against rumors of Kim’s surprise demise. Maybe he just is doing a very extreme version of social distancing to avoid any risk of COVID-19, of which North Korea says it has no cases.

But if he has died, then what?

1. The succession has not been planned so the transition will be difficult. Whoever takes over initially might not be the long-term victor, as in the lengthy battle to succeed the Soviet Union’s Joseph Stalin.

2. A collective leadership is likely initially but will be unstable. A primus inter pares is likely to soon emerge amid a bitter struggle: coming in second wins no prize in North Korean politics.

3. The victor will not be a family member. The only serious candidates are Kim’s sister, Kim Yo-jong, and half-uncle, Kim Pyong-il. The infamous Baekdu Bloodline will mean little to elites who believe it is their turn to rule and subjects who long ago lost their reverence for the Kims. Moreover, Yo-jong’s authority is derivative and the North remains highly patriarchal, while Pyong-il spent the last 41 years overseas in diplomatic posts, unable to tap into Pyongyang’s powerlines.

4. Kim’s shift of authority from military to party increases the likelihood of the latter maintaining control and someone outside the Baedu Bloodline taking over. Choe Ryong-hae, head of the Supreme People’s Assembly and unofficial regime number two, probably has the advantage, at least initially, though he would lack the obvious authority of Kim Jong-il and Kim Jong-un when they took over.

5. Whoever wins will remain cautious in dealing with the U.S. and South Korea. No one will have the authority to make a “big deal” involving nuclear weapons or much else.

6. China will loom larger without a dominant personality in Pyongyang. Kim Il-sung wiped out the pro-China faction and Kim Jong-un executed his uncle, the regime’s primary interlocutor with Beijing. The Xi government will enjoy a renaissance of influence.

7. Everything could go disastrously wrong. The politicians could divide bitterly. The military also could split, with different commanders biding for power. Violence could erupt, with potentially catastrophic consequences.

8. China, South Korea, and the U.S. all have contingency plans to intervene in such circumstances. Beijing would be most likely to go first, with no effective domestic opposition, a land route unobstructed by North Korean fortifications or troops, and a better chance of deterring substantial opposition by the Korean population.

9. If China moves quickly, South Korean hopes for reunification will be stillborn. Beijing will maintain a buffer state ruled by existing North Korean elites who have the most to lose from a South Korean takeover.

10. American policymakers might come to miss the certainty represented by Kim. Washington would face a regime with a growing nuclear arsenal in which Chinese influence had multiplied.

Then again, maybe everything is all right. Maybe Kim is just spending a couple of weeks incommunicado, soaking up some rays as spring warms the North’s rugged landscape. And when the next can’t-miss engagement comes along, he will reappear. Embarrassing just about everyone associated with what will have been revealed to be the latest foolish frenzy involving what remains, despite Kim’s greater worldliness, the forever Hermit Kingdom.