What Would Donald Trump Do if Kim Jong-un Died? 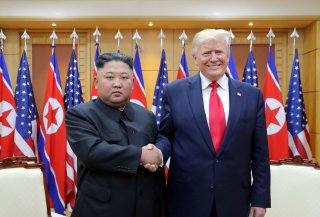 Is Kim Jong-un gravely ill? Was he close to death at any point over the past few weeks? And what would happen inside North Korea if its Supreme Leader dies without having laid the groundwork for an orderly succession?

As the past week has shown, these are difficult questions to answer from the vantage point of the United States. Without access to insider knowledge, the best that most US-based analysts can do is sketch out a range of scenarios that could feasibly come to pass.

Of course, the US government does not enjoy the luxury of merely having to know what might happen in the event of an unexpected crisis such as Kim’s rumored debilitation. Officials must also plan for what the United States will do in response to rapidly moving events. Over the past few weeks, the US intelligence community and the State Department’s corps of Korea experts have undoubtedly been working hard to put together information on both fronts: What has been going on in North Korea? And how should the United States prepare itself to act?

In more normal times, Americans could be confident that their president was handling a potential crisis in North Korea by marshalling this expert advice. But these are not normal times, and Trump is not a normal president. Trump has no patience for rigorous policymaking processes, and often relies upon advisers who have no specialist knowledge – his daughter Ivanka and son-in-law Jared Kushner, for example. This makes it difficult to predict what the President would do in response to tumultuous developments in Pyongyang.

Would Trump pursue a “wait and see” approach while events in Pyongyang played out? Would he extend the hand of friendship to whoever emerged as Kim’s successor as Supreme Leader? Would he try to interfere in North Korean affairs, perhaps by appearing to favor one contender for power over another? Might the President even listen to the counsel of those who still clamor for military action against the regime? With Trump in charge, none of these options can be safely ruled out.

What makes Trump so difficult to predict is that he is motivated primarily by short-term political advantage. He has styled himself as a potential peacemaker on the Korean Peninsula for the past two years, but it should not be forgotten that he began his presidency by threatening “fire and fury” against Pyongyang. To put it bluntly, Trump will pursue any foreign policy that he believes will serve him well in the moment. How he would read a crisis in Pyongyang is anyone’s guess.

When Kim Jong-il died in 2011, the Obama administration made a conscious choice to keep public pronouncements to a minimum. All that Obama tried to convey was a message of reassurance to US allies in the region. It was left to former President Jimmy Carter (almost certainly acting with the approval of Obama’s team) to send a message of condolences to North Korea, wishing success to the newly anointed Kim Jong-un. This was the model of a measured response, calibrated to avoid making a perilous situation worse. It would be comforting to believe that Trump would follow a similar path if faced with the untimely death of another North Korean leader.

Alas, there is little reason to believe that Trump would act – or tweet – with such restraint and forethought. The irony is that foreign observers are used to attributing North Korea’s behavior to the eccentricity of its leaders. But if anything, the broad contours of North Korean foreign policy are the product of structural conditions, not the caprices of those in charge. The same cannot be said of the United States under President Trump.

Peter Harris is an Assistant Professor of Political Science at Colorado State University. You can follow him on Twitter @ipeterharris.