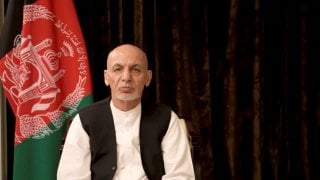 Ashraf Ghani, President of the Islamic Republic of Afghanistan, fled the country on August 15 as the Taliban closed in on Kabul, the country’s capital city. One week later, Ghani surfaced in the United Arab Emirates, which had agreed to give him political asylum.

On September 8, Ghani explained his decision to leave in English on Twitter, suggesting that he viewed his departure as “the only way to keep the guns silent” and keep violence from erupting in Kabul.

Ghani described his exit as “the most difficult decision of my life.”

“I left at the urging of the palace security, who advised me that to stay risked setting off the same street-to-street fighting the city had suffered during the civil war of the 1990s,” the statement read. The Washington Post also reported that Ghani feared for his life, having received information that the Taliban would behead him. The president’s departure was so sudden that several of his aides, who had been on lunch break and were not informed of his exit, reported wondering where he went.

During its initial takeover in the 1990s, the Taliban was known for launching bloody recriminations against Afghan leaders following its capture of cities. In 1996, after Kabul fell to the group for the first time, Taliban fighters captured Mohammad Najibullah, the last communist ruler of Afghanistan, and tortured him to death.

While the Taliban have committed to a peaceful transition of power via press conferences, the group has already begun to use violence toward dissidents—including beating a group of women who protested against the group’s all-male interim government, per CNN.

More than 170 Afghans have died in violence after the end of the war—the lion’s share in a suicide bombing conducted by ISIS-K at the Hamid Karzai International Airport outside Kabul. More than a dozen U.S. military personnel were killed in that attack, as were more than 150 Afghans.

In his statement, Ghani admitted to shortcomings in governing the country. "It is with a deep and profound regret that my own chapter ended […] without ensuring stability and prosperity," the statement read. "I apologize to the Afghan people that I could not make it end differently."

The president also vigorously denied reports that he had fled with $170 million in cash from Afghanistan’s treasury, calling the accusations “completely and categorically false.”

Taliban spokesmen have indicated that Ghani would be free to return to Afghanistan, although they have also pressured him to return the allegedly stolen funds.