Afghanistan Is Still Too Dangerous to Fail 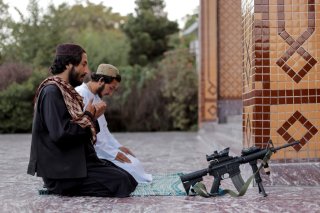 For too long, Afghanistan has been too dangerous to fail, a wilderness in a rapidly changing region replete with different variants of jihadist groups and weaponized Islamic nationalism. Despite many counterterrorism campaigns yielding mixed results, the forbidding outlook in Afghanistan today presents a physical reminder of our collective failure of imagination.

Two important paradoxes lie at the core of this failure of imagination and broadly explain America’s twenty-year engagement and subsequent disengagement from Afghanistan. Learning from past failures to acknowledge and resolve these contradictions is crucial to reimagining a normal Afghanistan. During America’s past engagement, the endless paradox was that the more Washington pushed to exit Afghanistan, the more it created the unfavorable conditions for it to remain engaged in the country. With the Taliban now back in charge, the current paradox appears to be that Afghanistan has never been this safe, but it has also never been this dangerous. Today, the killing of Al Qaeda leader Ayman al-Zawahiri in central Kabul is only the tip of the iceberg of this morphing threat.

Since the Taliban’s return one year ago, the broader terrorism landscape has dangerously evolved. Commercial jihadism has steadily increased, with scores of independent jihadists and unaffiliated militants now freely roaming across the country. Various competing jihadist factions have engaged one another to reconcile, with some negotiating their own separate peace and others realigning to establish new tactical partnerships. For its part, the Taliban has also steadily cemented—and, in some cases, readjusted—its own historic arrangements with jihadist franchises, including Pakistani, Uzbek, Tajik, Uyghur, Arab, and Baloch factions. All the while, several ideological variants have blossomed within the Taliban’s own ranks.

The Taliban has stayed dutifully compliant and accepting of Al Qaeda's two-fold parallel arrangement with the group. On the one hand, Al Qaeda has impressively bound the Taliban’s core clerical leadership in a religious contract since the 1990s. The Taliban’s clerics haven’t just stood by their thirty-year-old ideological promise—they have outlived it. On the other end of this promise, Al Qaeda has shrewdly involved different Taliban elements—especially the Haqqani Network, the Taliban’s glorified crime family—in an operational compact. Yet this relationship has not been monogamous. In the past, Al Qaeda has also kept close ties with other Afghan groups, particularly Hezb-e-Islami, a militant party led by Afghan warlord Gulbuddin Hekmatyar. In fact, it was Hekmatyar’s group that helped Osama bin Laden and Zawahiri in eastern Afghanistan during the U.S. campaign in 2001. But Al Qaeda’s unbroken pact with the Taliban has served as the basis of its deep confidence in the group, validated by Zawahiri’s decision to relocate to Afghanistan’s capital, a city under the control of the Haqqani family.

On top of his sprawling network of committed fighters, Sirajuddin Haqqani presently manages the police, internal intelligence, several airports, and the central passport agency as the Taliban’s interior minister. As a minister for tribal affairs, one of Siraj’s uncles is a leading figure in border management and intelligence collection. As the boy king of the crime family, Siraj’s thirty-year-old brother, Anas Haqqani, serves as a conduit with the Taliban’s cabinet ministers and runs the family’s public relations campaign. Inside Afghanistan, it is the Haqqanis who are directing the Taliban’s condemnation of Zawahiri’s killing, which has involved staging anti-American street protests and pushing a media campaign.

For now, whatever the impact of Zawahiri’s killing on Al Qaeda-Taliban ties, the relationship is too strong and multilayered to be disturbed. Senior Taliban members are likely to acquiesce to Al Qaeda’s demands, forcing them to reach an accommodation to contain any Al Qaeda reprisal or overreaction directed at the Taliban. Such tactical accommodation could potentially include more intelligence sharing, possible assassinations inside the Taliban’s ranks, the repositioning of Al Qaeda sites, and a tightened circle of personnel for operational security. Despite the expected weakening of Al Qaeda’s core leadership, it is unlikely to materially affect Al Qaeda’s longer-term tactical staying power in Afghanistan and the region.

What is more important to watch for is the possible impact the Zawahiri affair may have on flaring tensions within the Taliban’s governing class. Reports that senior Haqqani Taliban figures blindsided the non-Haqqani Taliban could potentially result in leadership rearrangements among the ruling Haqqani and Kandahari camps. Faced with the risk of defections, the Haqqanis are now appealing to their followers to strengthen their position, fueling and weaponizing anti-American sentiments as a force multiplier. Meanwhile, given Pakistan's own extensive ties with the Haqqani family, it is within reason to surmise some Pakistani complicity in the Zawahiri affair despite the government’s claims of maximum deniability. Still, the affair would strengthen Pakistan’s hand in any possible reshuffling in the Taliban senior ranks.

Despite these brewing developments, the Taliban has stayed focused on setting its rule in stone through a patient campaign to re-Islamize Afghan society. It has made crystal clear its desire to impose God's law and not man-made laws, pushing the former as unimpeachable and rejecting the latter as immoral because they follow the whims of corrupt humans. In this long twilight struggle, the Taliban has validated itself as the vanguard for pure Islamic leadership by burnishing its originalist credentials.

In this re-Islamization campaign, the Taliban’s broader objective seems to be civilizational, which involves engineering a common Afghan identity based on Islamic nationalism. In doing so, it has transformed the Taliban brand into a de facto ethnicity, language, social conduct, and requirement for appointments and patronage. Sharia courts have proliferated across the country. The civilian bureaucracy has become largely militarized, with senior roles occupied by functionally illiterate Taliban fighters. One underlying subtext behind these efforts is the Taliban's intentions to effectively strip non-Taliban Afghans of their identity, especially those who do not agree with the new regime. Yet, among the non-Taliban forces—largely still divided and reeling from the baggage of Afghanistan’s collapse—no viable or organized competitor has emerged to be supported as a practical alternative.

Although Washington’s current approach to Afghanistan seems to be doing more with much less, the emerging trendlines in Afghanistan are troubling. By reshaping its Taliban policy, Washington could explore several available opportunities. First, with the Afghan problem now largely regionalized, solutions should also be regionalized, with a focus on negotiating a regional pact. But in doing so, Washington would be ill-advised to depend on a single regional player (read: Pakistan) for a solution. Such an approach would repeat the toxic policy cycle of the past, caving to demands and front-loading concessions with little in return.

Second, until Washington gets over its reluctance to prop up a viable competitor from the disparate non-Taliban political groups, it could creatively expand its outreach to the Taliban’s ruling clerics in Kandahar to help develop a common language. Because these clerics command legitimacy and control, one option to consider is cultivating an informal counterweight within the ruling class, which could potentially help shape the regime’s choices and actions. Such direct outreach should involve forceful religious diplomacy, possibly through the State Department’s representative for religious affairs, as well as engagement with the different segments of America’s own Muslim population. Whatever model the United States deploys in the case of the Taliban will loosely guide its approach to other militant regimes in the future.

Javid Ahmad is a senior fellow at the Atlantic Council and a nonresident scholar at the Middle East Institute. Follow him on Twitter: @ahmadjavid.