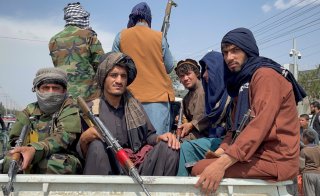 President Joe Biden entered office determined to end the war in Afghanistan. As the last U.S. forces left Kabul, Biden declared, “I was not going to extend this forever war, and I was not extending a forever exit.” Last month, National Security Advisor Jake Sullivan explained, “It had to come to an end.”

Both Biden and Sullivan’s justification of the withdrawal falls short. To remain was not to escalate but rather to stabilize. With only a skeleton force, the U.S. presence enabled Afghan forces to hold Kabul and every district capital. The expense of such a deployment was on par with the U.S. military presence in Japan and Korea. By rebranding deterrence as “endless war” deserving of condemnation, Biden convinced dictators in Moscow and Beijing that aggression could work.

Likewise, to justify U.S. withdrawal by pointing to the Afghan National Security Forces’ (ANSF) supposed refusal to fight, and then have Secretary of State Antony Blinken deflect blame for the military equipment left behind by arguing that it could not be used without American advisors or contractors is a logical fallacy. Elections matter, however, and Biden was clear about his desire to fulfill Donald Trump’s pledge to end the war in Afghanistan.

The United States was never going to be in Afghanistan in perpetuity, but the timing of withdrawal matters. The United States had already missed the deadline Special Envoy Zalmay Khalilzad had negotiated during the Trump administration. Biden’s selection of a new deadline was arbitrary. He initially chose September 11, the twentieth anniversary of the attacks on New York and Washington until aides convinced Biden that this would empower Al Qaeda. Biden then chose August 31. To pick a summer deadline, however, belied ignorance of Afghanistan: The fighting season lasts from April until November, after which winter conditions make many mountain passes impenetrable by foot or vehicle. Had Biden waited until November, then the ANSF would have had five months to prepare its defenses and there would have been no Taliban blitzkrieg.

Contributing to the chaos of the final withdrawal was the decision to rely on Kabul’s International Airport rather than the Bagram Airbase. The former was urban, hard to secure, and had limited runway capacity. That the White House never explained the logic behind its decision suggests that Biden’s top White House staff—none of whom served in the military—made their choice first rather than listen to experienced voices in the Pentagon.

Biden may have thrown the ANSF under the bus on his way out, but Ahmad Massoud’s National Resistance Front did begin armed resistance without any outside support. They succeeded in ambushing Taliban units in the Panjshir Valley and several surrounding districts. The State Department spokesman’s response to “discourage” anyone from supporting armed resistance to the Taliban was unconscionable. For Ned Price to advise, “We call on all sides to exercise restraint and to engage. This is the only way that Afghanistan can confront its many challenges” was divorced from reality. Special Envoy Thomas West’s pleas to the Taliban to diversify and his willingness to discuss channeling aid through the group highlight how the administration is still getting Afghanistan wrong.

The Need for Hearings

Congress and the media have spent millions of dollars, issued subpoenas, and held hearings to investigate the January 6, 2021, protest-turned-riot on Capitol Hill.

Certainly, an examination of the decisionmaking surrounding the Afghanistan withdrawal is equally justified. If Biden's aides ignored warnings, failed to consult or coordinate, or promoted a penchant for process on paper above the reality of the situation, then it is important to hold those individuals to account. It is also important to address an intelligence failure: How was it that the Taliban was able to infiltrate into almost every provincial capital to negotiate their own passage and government surrender without diplomats or the intelligence community being aware? How did thousands of Pakistani soldiers join them, also undetected?

On the first anniversary of the great abandonment, the White House may want to frame the debate as a choice between responsible statecraft or endless war. This is a false choice. With so much bloodshed and thousands more abandoned, Americans are overdue an honest accounting for the decisionmaking surrounding the withdrawal.

Afghans also deserve more. Our war may be over, but theirs is not. The Taliban broke their promise about seeking a broad reconciliation government. Those Afghans willing to fight against the Taliban’s Khmer Rouge-like corruption and terror should have America’s moral if not overt support. Supporting the resistance is an American interest. The Taliban did not win a military victory, but a battle of patience. Should any other power show resolve, the Taliban may collapse as rapidly as they spread through the country.

Plan for a Post-Taliban Afghanistan

Rather than seek to shore up Taliban legitimacy, the United States should plan for a post-Taliban future. One of the greatest mistakes of its two-decade experiment with democracy in Afghanistan was to insist on a strong Kabul. The reason for this was to enable the Afghan government to co-opt regional warlords while the U.S. military reconstructed the ANSF. At a local level, Afghans resent having a government imposed from outside their province or district. This is an issue the National Resistance Front must address as Afghans are wary that it might bring Tajik domination. Rather than lecturing the Taliban on women, the State Department would better serve everyone by crafting an attractive alternative to the Taliban’s brutal emirate.

It is also crucial to recognize that the Taliban are not a natural manifestation of Afghan political culture. Rather, they are a proxy of Pakistan and its Inter-Services Intelligence Agency (ISI). Whether the United States is a combatant or not, there will be no peace in Afghanistan until the cost of the ISI’s interference is too great for Pakistan to bear. As such, it is a U.S. interest to treat Pakistan as a terror sponsor. Breaking decades of ISI-dominated foreign policy is the only way to end Pakistan’s addiction to militancy and save it from state failure.

In March 2000, I visited the Taliban’s Islamic Emirate. At the time, the Taliban sought U.S. recognition. They claimed to have quarantined Al Qaeda founder Osama bin Laden and closed terror training camps. They lied. They also claimed to be the legitimate government based on the fact they controlled 90 percent of Afghan territory. But, in hushed conversations in markets, taxis, schools, and restaurants, Afghans from Kabul to Kandahar told me that while they welcomed the Taliban to end the chaos of Mujahedin rule, they soon realized the Taliban were more corrupt and abusive. They had no popular support and their regime was a house of cards. A new generation now of Afghans has learned the same lesson. This time, however, Washington should be prepared for the inevitable fall of the Taliban.