Constitutional Monarchy Can Save Libya From Anarchy 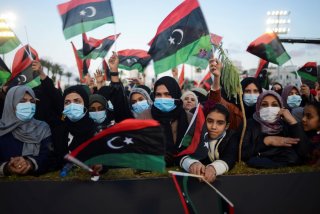 As you know, you are the seventh United Nations (UN) Special Envoy for Libya since 2011. You’ll also be joined by new ambassadors from America and France and no doubt have the chance to share your observations at some of Libya’s nicer hotels.

But unlike the ambassadors, it won’t all be dinners and photo-ops.

You are meant to lead the effort to fix a country ruled by a self-proclaimed political elite with no mandate—and no real interest in having one.

You have to juggle constant military and political interference from at least five countries, each with its own red lines and preferred outcomes.

And you have to deal with normal Libyans like me, who will likely end up resenting your good intentions.

To make matters worse, the organization that appointed you is utterly dysfunctional.

Even when the world was more normal, the UN could not fix Libya. In a new Cold War, it is unclear how the UN will come to a consensus on anything—let alone a crisis where energy and geopolitical real estate are at stake.

But nobody expects you to fix Libya straight away. Your first task is to hold elections.

Libya’s incumbent “elite” is entirely composed of bad-faith actors. The whole point of elections is to dislodge them from power and they know it. Or, in other words, they have no interest in helping you and plan to lead you in circles. It is no wonder that elections didn’t happen in December 2021 or at any point before that.

And let’s think about what the election would look like against a backdrop of ballot stuffing, a security vacuum, and international intervention. I can’t imagine what such an event would look like and I don’t want to.

And consider the candidates. When Libya was last scheduled to hold elections, the leading candidates were, among other terrible people, a corrupt politician, a suspected war criminal, and a convicted war criminal.

And did I mention that, because Libya doesn’t have a constitution, it’s unclear what their powers actually involve?

The truth is that you will probably never meet the first democratically-elected president of Libya. The system is rigged against you and against all of us. Instead, you’ll spend your time learning to hate Libya’s two prime ministers, Abdulhamid Dbeibeh, who is now overstaying his (unelected) mandate that ended on June 22, and Fathi Bashagha, who was picked by the House of Representatives which, in turn, was elected in 2014 in an election that had less than 20 percent turnout.

Forgive my pessimism. The last eleven years have given Libyans little reason for hope. And to be candid, one of the reasons why is because the UN seems intent on doing the same thing over and over again.

If you intend to do the same and have accepted that your fate is to be the latest victim of Libya’s thugocracy, you can stop reading now.

But if you’re willing to listen to an ordinary Libyan with no gun and no foreign paymasters, I humbly offer three suggestions.

My first piece of advice? Don’t hit the ground running.

Your predecessor, Stephanie Williams, is a tenacious lady. But please don’t blindly follow her example. Between her arrival in July 2018 and now, nothing has changed. Libya’s ruling thugocracy has gotten fatter, flown to Paris, Berlin, Dubai, and Cairo to dine at luxury hotels, their corruption legitimized with countless handshakes and photos.

As for the Libyan Political Dialogue Forum, meant to represent a mystical “cross-section of Libyan society,” it’s now under investigation for corruption. What. A. Surprise.

And what have ordinary Libyans gained? Rolling blackouts, bread lines, and fuel shortages. Oil production is still being cut off, most recently last month. And we are not an inch closer to what Libyans want. And I’m not talking about elections.

We often hear that 2.8 million Libyans registered to vote. Registering to vote is not voting for elections. By registering to vote, 2.8 million Libyans voted to end a crisis they do not deserve. Everyone wants an election, a constitution, and a dignified life. Your job is to think about how we get there with minimal suffering. Perhaps start by asking if elections are such a good idea.

My second piece of advice? Think about the idea of Libya.

You are dealing with a fractured country that historically exists in three parts. To put the country back together again, think about what keeps it together and what makes Libyans into the proud, stubborn people you are going to get to know well. In thinking about how this crisis ends, you will need to appeal to national identity.

You may look down on the flag-waving masses. But flag-waving is a phase any nation needs to pass through, especially a young one. Libyans need to rally around an idea bigger than their own towns, cities, and tribes. They need an idea that heals forty-two years of damage done by Libya being identified with the eccentric leader of a military coup as well the divisiveness of the eleven years after that.

As you go about your work, please think about how you can heal not just the body but also the soul of a broken country.

My third and most important piece of advice? Dip your feet into Libyan history. I have a book recommendation for you: Libyan Independence and the United Nations.

What many people forget is that Libya has been in this situation before: divided, on edge, and hardly a country at all. The solution the UN got behind was to unite Libya around Idris al-Senussi, a non-tribal leader that fought for Libya’s independence. Idris became Libya’s first and only king under Libya’s first and only constitution.

From 1951 to 1969, Libya had regular elections, a functioning government, and religious freedom. Women actually voted in Libya before they did in Switzerland. It was not paradise but the constitution worked until Gadhafi replaced it in 1969, quite literally, with himself.

Today, many Libyans want the monarchy and the old constitution back. I’m one of them. Our ideas have been ignored by the “experts” and “specialists” for around a decade, mostly because they project stereotypes about Middle Eastern monarchy onto our history. Instead, they have promoted poli-sci nonsense: “longing for lasting stability,” “consensus formulas,” and other terms that sound like they were coined by a Hollywood marriage coach rather than serious diplomats.

But it is because of their failure that we hold out hope that one day the custodians of our misery come to their senses and see the obvious: that the future literally depends on the past and that the old constitution must be reactivated.

Put the monarchy on the table. You can completely change the equation in Libya. You can create a wave of momentum that can inspire Libyans to believe that there is light at the end of the tunnel.

And if that’s not enough? Well, heck, you have nothing to lose. As we now know, Libya is not a graveyard for diplomatic careers, even though it should be.

Sami Ibrahim Elalem is a political analyst and constitutional expert based in Tripoli. He is coordinator of the National Initiative for the Return to Constitutional Monarchy.