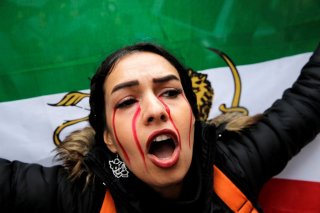 Iran’s parliament voted on Tuesday to approve the use of the death penalty against demonstrators arrested during the country’s ongoing protest movement—sparked in September with the death of twenty-two-year-old Mahsa Amini after her arrest by the country’s morality police.

In the wake of Amini’s death, Iran has experienced its largest and most significant wave of protests in over a decade. While previous protest movements, including those in 2017 and 2019, were primarily framed around economic issues such as rising fuel prices and lack of access to electricity, the current protests are explicitly anti-government in character, and many commentators have described them as the most significant internal challenge to Iran’s theocratic government since the Islamic Republic’s founding in 1979. Consequently, Iranian authorities have vowed to crush the protests, deploying hundreds of thousands of police and Basij militia units across the country to suppress the ongoing demonstrations. The Iranian government has also cut off internet access throughout the country. However, some Iranians have maintained links to the outside world through virtual private networks or VPNs.

In addition to its use of force, the Iranian government has attempted to dissuade protesters through harsh punishments in the country’s judicial system. On Monday, 227 of the Iranian parliament’s 270 members urged the country’s judges to institute harsh penalties against convicted “rioters,” arguing that doing so “would serve as a good lesson in the shortest possible time.” The same majority recommended the execution of protesters in custody on Tuesday, claiming that doing so represented a “hard lesson” for Iranians who had broken the law and would discourage others from following them.

Masoud Setayeshi, a spokesman for the government, praised the parliament’s actions on Tuesday, claiming that the Iranian public “who are not supportive of riots … demand from the judiciary and security institutions to deal with the … people who have caused disturbances in a firm, deterrent, and legal manner.”

So far, around 300 Iranian civilians have been killed in the protests, according to the Norway-based Iran Human Rights non-governmental organization, and at least 14,000 have been arrested. Despite these numbers, the protests have continued at full strength as they approach their third month, and Iranians have launched additional demonstrations to commemorate others killed by the country’s security forces during the uprising.