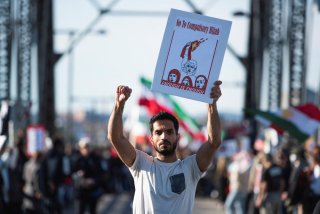 The Iranian government will hold public trials for at least 1,000 demonstrators arrested during the ongoing anti-government protest movement over the next week, according to Iran’s state-run IRNA news agency.

Ali al-Qasi Mehr, the chief justice of Tehran, made the announcement on Monday, declaring that those who “have serious accusations, including assaulting or martyring security guards and setting fire to public property … have been scheduled in [the] Revolutionary Court,” according to CNN. The government indicated that 315 people were to stand trial in Tehran, while the Iranian Students News Agency announced that at least 700 other demonstrators had been charged in other areas of the country.

Iran’s nationwide demonstrations began on September 16 when Mahsa Amini, a twenty-two-year-old Kurdish woman from the country’s northwestern Kurdistan province, died after her arrest by the Iranian morality police. While the state-sponsored autopsy claimed that Amini had died of health complications following a heart attack in police custody, eyewitnesses who were with her at the time of her arrest claimed that she had been severely beaten by the police, leading to brain damage and her death three days later. Although the protests began in Kurdistan and have remained the strongest there, they have since spread across the country, taking place in all major cities and involving millions of Iranians. Iran has experienced periodic nationwide protests over the past two decades—most recently in 2019, when unrest over fuel price increases led to violence resulting in as many as 1,000 deaths—but previous demonstrations have usually been launched in response to resource shortages, such as limited access to water or electricity. By contrast, the current protest wave has been framed both by demonstrators and the Iranian government as an anti-clerical protest intended to replace the Islamic Republic.

In response to the protests, the Iranian government has instituted a sweeping crackdown, involving both traditional police and security forces and units from the Islamic Revolutionary Guard Corps (IRGC). At least 250 civilians are thought to have been killed in the demonstrations, as well as dozens of police and IRGC militiamen.

Over the weekend, Maj. Gen. Hossein Salami, the commander-in-chief of the IRGC, demanded that Saturday would be “the last day of the riots” and warned Iranians to remain off the streets from then forward. However, the protests have continued through the week, and new footage of mass demonstrations continues to circulate regularly on social media. Iran’s universities, particularly the Sharif University of Technology in Tehran, have become key focal points for the protests and have been the site of repeated clashes since September.