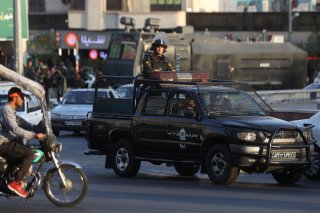 The Iranian government deployed its security forces around several of the country’s largest universities on Wednesday, according to local eyewitnesses—an apparent attempt to crush the nation’s ongoing protest movement.

The nationwide protests against Iran’s theocratic government—initially sparked after twenty-two-year-old Mahsa Amini’s death following her arrest by Iran’s morality police—have marked the most significant challenge to the ruling authorities in more than a decade. Although Iran has witnessed a steadily growing series of protests since 2017, the current demonstrations are the largest protests inside the country since 2009. Moreover, while most previous protests have had non-political proximate causes, such as a failure to supply water or electricity evenly across the country, the current protest movement has been framed by both demonstrators and Iranian officials as an existential struggle against the Iranian government. Consequently, regime officials have launched a severe crackdown on the protesters, reportedly killing more than 150 demonstrators and imprisoning thousands. The Iranian government has also instituted a near-total internet blackout inside the country, preventing demonstrators from communicating with each other or sending footage of security forces’ actions outside the country.

Local sources reported that Iranian security forces had been deployed to the cities of Urmia, Tabriz, Rasht, and Tehran on Wednesday—four of the country’s largest cities and home to most of its highest-ranked universities. Young, well-educated, and often Western-facing, Iranian university students have participated in previous protest movements against the clerical government, most notably a series of student protests in July 1999, and have remained at the forefront of the current demonstrations.

Students on university campuses in Tehran reported that hundreds of members of the security forces—both regular police and the Basij internal security forces of the Islamic Revolutionary Guard Corps (IRGC)—had surrounded the campuses and were “waiting outside to arrest students” if they participated in demonstrations, according to Reuters.

At the same time, the protests have reportedly spread beyond universities to Iran’s high schools. Videos circulated widely on social media on Wednesday depicting a classroom of high school girls removing their headscarves and chanting “Death to Khamenei,” the country’s octogenarian supreme leader. Footage reportedly from Shiraz showed a group of girls surrounding a member of the Basij who had been invited to speak, forcing him to leave the engagement.

The Iranian government has denied attacking protesters, claiming instead that its security forces were assaulted by mobs. Both Khamenei and Iranian president Ebrahim Raisi have addressed Amini’s death in public statements, claiming that it had upset them but vowing to continue the use of violence against protesters, which they claimed had been sponsored by foreign governments.