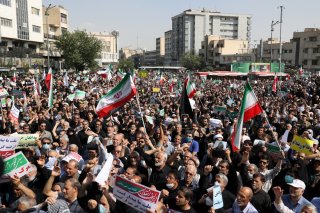 The Iranian government announced on Wednesday that it had indicted more than one hundred people for “rioting” following their arrests during Iran’s nationwide protest movement over the death of twenty-two-year-old Mahsa Amini in police custody.

Ali Salehi, the prosecutor general in Tehran, announced that sixty indictments had been issued within the capital city, while an additional sixty-five were reportedly issued in the southern province of Hormozgan, according to Iran’s state-run IRNA news agency. Iranian government officials accused the alleged rioters of “creating illegal gatherings, arson, and [the] violation of a number of government and private places.”

As part of a wider crackdown against the protest movement, Iran’s court system has come under pressure to swiftly punish those arrested during the protests. Prior to the indictments, Iranian chief justice Gholam-Hossein Mohseni-Ejei ordered lower judges to prioritize those who had been arrested for “riots” over other detainees. Majid Mirahmadi, a senior interior ministry official, also warned demonstrators last week that “anyone who is arrested [during] the riots will not be freed under any circumstances until the time of their trial, which will be held quickly and will issue assertive and deterring sentences.” Other Iranian authorities, however, have claimed that many who were arrested were released after signing promises not to participate in further protests.

In addition to arrests, Iranian security forces—including both the country’s traditional police force and the Basij militia, a branch of the Islamic Revolutionary Guard Corps (IRGC) created to maintain public order—have used violence against demonstrators. At least 200 people are estimated to have been killed in clashes, although the true number is probably substantially higher. At the same time, the government has imposed an internet blackout across Iran, preventing protesters from communicating with each other and restricting the flow of information out of the country.

The Iranian government has refused to estimate the number of protesters killed in the violence but has recorded the casualty count among the security forces, claiming that twenty lost their lives in clashes with rioters. It has also denied responsibility for Amini’s death, claiming that she had suffered a heart attack following her arrest and refusing to address eyewitness accounts that she had been beaten to death by the country’s morality police.

Several high-ranking Iranian officials have also accused the United States, Great Britain, Israel, and other Western countries of helping to organize the demonstrations. The Iranian intelligence ministry announced in late September that it had arrested nine foreign nationals during the protests, although it did not provide further details.