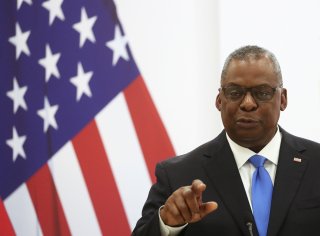 Secretary of Defense Lloyd Austin warned on Thursday that the United States was considering pursuing other options in constraining Iran’s nuclear program if the ongoing negotiations in Vienna failed to produce a settlement returning Iran to compliance with the 2015 “Joint Comprehensive Plan of Action” (JCPOA) nuclear accord.

At a meeting with Israeli Defense Minister Benny Gantz on Thursday, Austin claimed that he was “deeply concerned about the Iranian government’s actions in recent months, both its continued provocations and its lack of constructive diplomatic engagement.” Austin promised that the United States would “work closely with all of our partners throughout the region, including Israel first and foremost, to ensure that we are working together to address Iranian threats.”

“The president has made clear that if diplomacy fails, we are prepared to turn to other options,” Austin said, although he did not specify what other measures would be taken if negotiations continued to flounder.

After the resumption of negotiations on Thursday, with the United States playing an indirect role, the administration also sent a delegation to the United Arab Emirates to study ways to make U.S. sanctions more effective. Earlier in the week, the Treasury Department applied additional sanctions to Iranian officials linked to human rights abuses within the country, particularly members of its security forces who had violently suppressed a wave of protests in late 2019.

Although the Vienna negotiations have been supported in rhetoric by both President Joe Biden and Iranian president Ebrahim Raisi, who promised to return to the deal at his August inauguration. So far, negotiations have stalled. Iranian officials are unwilling to move forward without immediate sanctions relief from Washington—a demand that U.S. officials have characterized as a non-starter.

Israel has previously indicated that it would not be bound by any American-negotiated settlement with Iran and would continue to take whatever measures it considered necessary to constrain Tehran’s ability to produce nuclear weapons. In November 2020, Israeli agents assassinated Mohsen Fakhrizadeh, a high-profile Iranian nuclear scientist, which the Iranian government described as an act of “state terror.”

Israel was one of the most significant voices in opposition to the 2015 nuclear deal, with then-Prime Minister Benjamin Netanyahu voicing his opposition to a joint session of Congress in 2015. Netanyahu emerged as a close ally of former President Donald Trump and played a key role in his 2018 decision to withdraw from the agreement.