Sanctions Showdown: What Happens if the Iran Talks Fail? 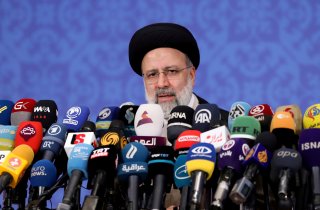 After the recent report by the International Atomic Energy Agency (IAEA) on Iran’s nuclear program, Secretary of State Antony Blinken said the United States is fast approaching the critical point when a return to the Joint Comprehensive Plan of Action (JCPOA) would no longer produce the non-proliferation outcome the original deal anticipated. The last-minute meetings in Tehran between the IAEA director-general and Iranian officials have addressed the nuclear watchdog’s immediate concerns concerning their monitoring equipment and averted a crisis that could derail diplomatic negotiations over the JCPOA. However, the mutual distrust and complexity of disagreements between Tehran and Washington have made a compromise to revive the JCPOA difficult. Despite the challenges, a diplomatic solution is still the least costly option for both countries, not to mention Iran’s neighbors in the Middle East.

Since the inauguration of Iranian president Ebrahim Raisi, the new administration has adopted a policy of tactical ambiguity regarding its plans for the JCPOA. On the one hand, Raisi has repeatedly stressed that ending sanctions on Iran is a priority for his administration and his ministry of foreign affairs recently announced that Iran will return to the Vienna negotiations soon. On the other hand, the administration has not provided any specifics about its position vis-à-vis the previous rounds of negotiations or their expectations and demands in the upcoming talks.

On the one hand, Raisi has repeatedly stressed that ending sanctions on Iran is a priority for his administration and his ministry of foreign affairs recently announced that Iran will return to Vienna negotiations soon. On the other hand, they have not provided any specifics about their position vis-à-vis the previous rounds of negotiations or their expectations and demands in the upcoming talks.

Moreover, the decision to finally end America’s senseless and seemingly endless twenty-year war in Afghanistan has put tremendous political pressure on the Biden administration. Washington hawks who opposed U.S. withdrawal have blamed Biden for the Taliban takeover, portraying him as a weak leader who has undermined U.S. credibility globally and with its allies. Others, including Democrats, blame the administration for the fiasco at the Kabul Airport and the poor management of the evacuation effort. Amid these criticisms, the president’s approval rating has hit a new low and, given the upcoming midterm elections in November 2022, it is unclear whether the administration will have the political capital, let alone the required will and imagination, to offer Iran the sort of guarantees that would be necessary to revive the nuclear deal.

From the Iranian perspective, the value of the JCPOA has diminished significantly in the intervening years. While Iran’s economy remains in dire straits and the country struggles to manage the pandemic, the political establishment believes that a return to the JCPOA, absent some concrete assurances about effective sanctions relief, might eventually lead to a similar scenario like the one Iran endured with the Trump administration’s unilateral abrogation of the JCPOA.

Thus far, the experience of the JCPOA made the Iranian leadership realize that, with its stockpiles of enriched uranium shipped out of the country and its advanced centrifuges decommissioned, Tehran would be left vulnerable to the whims of the United States with no mechanism or leverage to guarantee the sanctions relief to which Iran would be entitled. From Tehran’s point of view, evidence for Western violations of both the letter and the spirit of the Deal abounds. Shortly after the JCPOA implementation commenced, the U.S. Congress and the Obama administration inaugurated a new round of sanctions and visa restrictions against Iran, this time branding the measures as against the country’s non-nuclear activities. Ultimately, the Trump administration unilaterally ended U.S. participation in the JCPOA and imposed a draconian “maximum pressure” sanctions regime to gain Iranian capitulation.

To remedy this perceived failure, since 2019, Tehran has attempted to build significant leverage by expanding its nuclear program, both in terms of its stockpile of enriched uranium and its arsenal of advanced centrifuges. According to most estimates, Iran’s breakout time is currently down to one to three months from over a year under the JCPOA restrictions. Iran is unlikely to give up its built-up nuclear leverage without ensuring a sustainable negotiated solution that is both readily enforceable and generally binding.

Such diverging political and strategic calculations on the part of Tehran and Washington make reviving the JCPOA in Vienna exceedingly difficult. Although the JCPOA remains the best available option from a non-proliferation standpoint, it is unclear whether the two sides are willing to provide the necessary concessions to reach a compromise within its parameters. Nevertheless, at the moment, alternatives to the deal remain few and far between, limited in scope, and highly costly for both sides.

The least costly alternative to the JCPOA appears to be a limited and temporary agreement within the P5+1 framework as a stopgap measure to freeze Iran’s nuclear advancement at its current level in return for selective sanctions relief on oil exports and on Iran’s access to its foreign reserves. Similar to the interim agreement reached between P5+1 and Iran in November 2013, this new limited agreement will provide more time to Iran and the West to negotiate a comprehensive solution while preventing a full-blown escalation.

Such an interim agreement would be easier for the Biden administration to sell in Washington. The administration can claim that it has stopped the clock on Iran’s program and blocked its path to nuclear weapons while maintaining most of the sanctions and preventing another conflict in the Middle East.

On the Iranian side, meanwhile, the Raisi administration can claim that it has delivered on its promise for sanctions relief without giving up the country’s nuclear leverage, thus leaving the West with a real incentive to keep its word. Given that Raisi’s conservative supporters have been fierce critics of the JCPOA, even blaming former President Hasan Rouhani and his foreign minister, Mohammad Javad Zarif, for its shortcomings, selling a short-term deal as a path towards a stronger long-term agreement might be politically expedient for the Raisi administration.

The two sides are operating under clear strategic objectives. From a purely cost-benefit analysis, if the nuclear negotiations fail altogether, Iran will expand its nuclear program and shorten its breakout time. Further unrestricted expansion of Iran’s enrichment capabilities and its stockpile of enriched uranium will eventually turn Iran into a threshold nuclear state with near-immediate breakout time. The United States and its allies have been patient with Iran’s nuclear expansion in recent months because they don’t want to block the path back into the JCPOA. However, if the negotiations collapse, then they likely will take steps to pressure Iran into halting its nuclear expansion.

Under this scenario, the Biden administration, with the backing of its European allies, will try to form an international coalition against Iran in the IAEA and the UN Security Council similar to what President Barack Obama set in motion in the years before reaching the nuclear agreement with Iran in 2015. However, this time around, it is unclear whether China and Russia will readily follow the United States in imposing international sanctions against Iran. While Russia has recently been more vocal against Iran’s nuclear expansion, Moscow has also announced that it will vote against any formal resolution against Iranian nuclear activity at the IAEA. Meanwhile, China has consistently blamed Washington for the failure of the JCPOA. While China wants to prevent a nuclear-armed Iran, bilateral relations between Washington and Beijing have deteriorated substantially since Obama’s time in the White House. Beijing might also benefit from prolonging the ongoing nuclear standoff between the United States and Iran, which would keep Washington’s focus on the Middle East and distract it from its principal strategic competitor in East Asia.

In the likely scenario that more sanctions fail to bring Iran to the negotiating table and stop its nuclear expansion, the Biden administration will be pressured to carry out sabotage operations or even military strikes against the Iranian nuclear facilities. However, both options are high-risk and can only delay Iran’s nuclear advancements, rather than dismantling the program altogether. After every sabotage operation or assassination of Iranian nuclear scientists, Tehran has successfully recovered and further enhanced its nuclear capability. In addition, Iran’s nuclear facilities are widely dispersed, fortified underground, and protected by air defense systems, making a precision military strike extremely challenging. Not only would the use of force likely fail to eliminate Iran’s nuclear program, but it can also provoke the Islamic Republic to make the ultimate decision to develop nuclear weapons as deterrence against future attacks.

While the Biden administration came to power with the intention to restore the JCPOA with Iran, distrust and complex strategic and political considerations in both capitals have made it rather difficult for Tehran and Washington to reach a compromise toward its revival. If that effort fails, then the least costly and most realistic option will be a limited agreement that offers Iran some sanctions relief in exchange for freezing its nuclear program at the current level. This temporary solution will not be perfect, but it will provide additional time for diplomacy and trust-building measures that could lead to negotiations for a stronger and more enduring agreement that addresses the core concerns of the United States and Iran.