Drying Up: Unrest in Rural Iran Over Water Scarcity 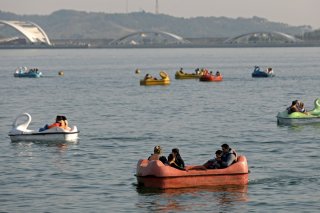 Iranian police arrested several demonstrators over the weekend at protests near Lake Urmia, a former tourist hotspot that has dried up significantly since the mid-1990s, following changes to the Iranian government’s water use policy and a series of major droughts.

“Lake Urmia is dying, parliament orders its killing,” several demonstrators were recorded chanting at the protests by local sources. Local police were soon dispatched to break up the event, claiming that it had been intended to disturb public security, according to Radio Free Europe/Radio Liberty’s Farsi-language Radio Farda branch.

Iran’s Lake Urmia, a salt lake located within the country’s northwestern Azerbaijan province and near its border with Turkey, had long served as a major vacation destination within the country and was renowned for the alleged healing properties of its mud. However, throughout the 1990s, new agricultural developments, the construction of dams across the lake’s tributaries, and several successive years of extreme drought sharply decreased the lake’s water levels. Today, the lake is roughly one-tenth the size it was before 2000, and the remaining water has become infected by red algae, endangering further tourist visits. The lake’s decrease in size has seen a significant drop in tourism and consequently in tourist revenue, decimating the local economy and leading many residents to move away.

The Iranian government has taken measures to enlarge the lake again in recent years, including efforts to persuade local farmers to plant less water-intensive crops. The lake has grown in size over the past half-decade, but it remains unclear how much of that growth can be attributed to Iranian government policies when compared to a naturally-occurring increase in rainfall. The Azerbaijan provincial governor announced last week that “irreparable” damage would occur to the local environment if more resources were not devoted to saving the lake, according to local sources.

Iran has experienced an increase in severe weather over the past decade, leading to water shortfalls in some areas and prompting demonstrations against perceived government mismanagement. In 2021, water shortages in Iran’s southwestern Khuzestan province led to mass protests against the ruling authorities, which local demonstrators also alleged had engaged in a pattern of discrimination against the province’s local Arab minority. Similar protests later erupted in Isfahan, a city in central Iran, after a nearby river was diverted to irrigation projects, leading to negative environmental consequences.