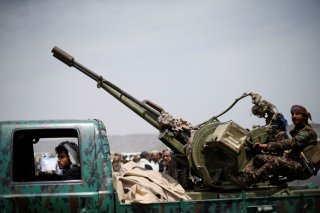 Yemen’s civil war, now in its eighth year, appears set to resume today following the expiration of a two-month truce implemented ahead of the Islamic holy month of Ramadan, although Western governments and international organizations have urged all parties to extend it through negotiations.

Yemen’s civil war has raged since 2014, when a group of northern Shia Muslim rebels known officially as Ansar Allah but colloquially referred to as the Houthis seized Sana’a, Yemen’s capital, from the government of then-President Abdrabbuh Mansour Hadi. In the years since, the Houthis have consolidated their hold over much of northern Yemen and advanced south, converging on the key central Yemeni city of Marib. An international military coalition led by Saudi Arabia intervened on the government’s side in early 2015, but it has largely failed to make progress against the Houthis and has since been implicated in a series of war crimes. The war has prolonged the world’s worst humanitarian crisis, and a simultaneous famine, cholera outbreak, and COVID-19 pandemic have severely impacted Yemen’s civilian population.

In early April, the conflict’s major participants agreed to a two-month ceasefire, temporarily pausing the conflict for the first time since 2014. The ceasefire, accompanied by deliveries of humanitarian aid to Yemen’s normally-blocked ports and a political shakeup in the south, significantly decreased the country’s violence and led to positive impacts on civilian life, according to the United Nations.

However, the truce is scheduled to expire today, and efforts to renew it have so far proved unsuccessful. While the Houthis, widely considered the primary obstacle to ceasefire agreements, have indicated that they would consider an extension of the truce, U.S. UN ambassador Linda Thomas-Greenfield warned that the discussions were “a bit in trouble” and were not projected to succeed before the ceasefire expired. An issue of contention between the Saudi-backed government and the Houthis has been the Houthi blockade of Taiz, which the Houthis were obliged to lift during the previous ceasefire. The Houthis ultimately refused to do so, leading to anger in the city and accusations of hypocrisy from Riyadh, which allowed humanitarian aid to enter the Houthi-controlled port of Hodeidah and permitted flights in and out of the Sana’a International Airport during the truce period.

UN Secretary General Antonio Guterres and UN Special Envoy for Yemen Hans Grundberg have both urged a return to a ceasefire, which Grundberg’s office tweeted was “critical to solidify[ing] benefits delivered so far and provid[ing] space to move towards a political settlement.”