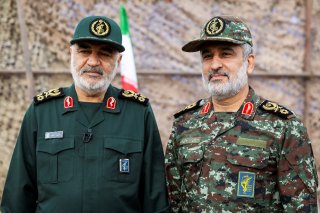 Iran’s Islamic Revolutionary Guard Corps, the branch of the country’s military responsible for maintaining the Iranian government’s theocratic character, announced on Thursday that it had replaced its longtime intelligence chief—a switch possibly motivated by a series of mysterious attacks within Iran, leading to the deaths of several high-profile Iranian scientists and military officials.

IRGC spokesman Ramezan Sharif announced that Hossein Taeb, who had led the IRGC’s intelligence operations for twelve years, had been replaced by Maj. Gen. Hossein Salami, the IRGC’s overall commander, with General Mohammad Kazemi. Salami reassigned Taeb as his personal adviser, according to Sharif’s statement.

Although a reason for the switch was not provided in the statement, it is thought to be related to the assassination of several members of the IRGC, most likely by Israeli operatives. In late May, Col. Hassan Khodayari was shot to death outside his home by two attackers on motorcycles; a city-wide manhunt failed to find the perpetrators.

An explosion at an IRGC research facility on May 26 killed Esam Qadbeigi, a researcher working with the group. On June 3, Iranian Quds Force commander Col. Ali Esmailzadeh mysteriously died “in an accident in his home,” according to Iran’s state-run IRNA news service. And on June 13, IRGC aerospace officer Ali Kamani was allegedly killed in a car accident, although the IRGC has not publicized the circumstances surrounding his death.

Taken together, the deaths—which have occurred as Iran is thought to be on the threshold of constructing its first nuclear weapon—appear to suggest a pattern of Israeli involvement.

Israeli’s Mossad national intelligence agency is known to have conducted prior assassinations of Iranian scientists, sometimes with the cooperation of Iranian anti-government groups such as the Mojahedin-e-Khalq, or MEK. The two groups are thought to have coordinated the car attack that killed Iranian nuclear scientist Mohsen Fakhrizadeh in November 2020, a killing that was described by the Iranian government as an act of “state terror” and was widely condemned around the world.

Although Israel has not acknowledged responsibility for the latest round of attacks, Tehran has accused “Zionists” of responsibility and has vowed revenge. Iran has been unsuccessful in launching similar attacks against Israeli officials within Israel, but it is known to have launched attempts on civilians abroad, including the bombing of an Israeli tour bus in Bulgaria in 2012.

On Thursday, police in Turkey also announced that they had captured eight Iranian agents allegedly plotting to assassinate Israeli tourists in Istanbul—a threat that prompted Tel Aviv to urge its citizens to leave Turkey immediately because of the possibility of further action.