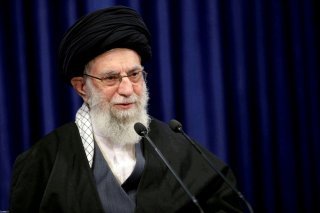 Richard Moore, the director of Britain’s Secret Intelligence Service, or MI6, said at the Aspen Security Forum on Thursday that he was skeptical of Iran’s intentions in its nuclear negotiations, speculating that Iranian supreme leader Ali Khamenei was not interested in a renewed deal but would not break off negotiations altogether.

“I’m not convinced we’re going to get there,” Moore said regarding a renewal of the Joint Comprehensive Plan of Action, the landmark nuclear accord agreed between Tehran and the“P5+1 nations—the United States, the United Kingdom, France, Germany, Russia, and China—in 2015. Under that agreement, international sanctions related to Iran’s nuclear program were waived in exchange for the Iranian government’s commitment to suspend most uranium enrichment activities.

Although the agreement was vocally criticized by many American conservatives at the time of its negotiation, Iran maintained compliance with it until President Donald Trump unilaterally withdrew and reimposed harsh sanctions on Tehran in 2018. Following Trump’s withdrawal, Iranian officials initially attempted to remain within the deal, but Tehran gradually ceased compliance before withdrawing altogether after the assassination of Islamic Revolutionary Guard Corps (IRGC) Quds Force Gen. Qassem Soleimani in January 2020.

While both U.S. president Joe Biden and Iranian president Ebrahim Raisi have voiced their support for re-entry into the deal, Moore speculated that Khamenei was less motivated to do so. “I don’t think the Supreme Leader of Iran wants to cut a deal,” the British spy chief claimed, although he observed that Iranian officials “won’t want to end the talks either, so they could run on for a bit.”

“I think the deal is absolutely on the table,” he added. “And the European powers and the [Biden] administration here are very clever on that. And I don’t think that the Chinese and Russians, on this issue, would block it. But I don’t think the Iranians want it.”

Although U.S., European, and Iranian officials are in broad agreement about the outline of a renewed nuclear deal—namely, the end of Western nuclear-related sanctions in exchange for Iran’s suspension of its enrichment activities and export of existing nuclear material—the negotiations have stalled following other political concerns, including Iran’s insistence that American negotiators guarantee that the United States would not withdraw from the agreement if a future administration were opposed to it. The Biden administration is poorly equipped to make such a guarantee, as many Republicans have continued to oppose negotiations with Iran in favor of the Trump administration’s “maximum pressure” strategy.

Iranian officials have also pushed Biden to delist the IRGC from the U.S. list of foreign terrorist organizations, which Biden has publicly refused to do, even at the cost of a renewed nuclear agreement.