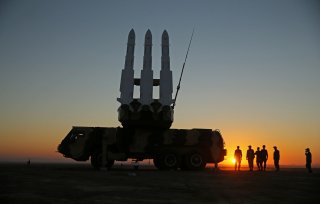 Iranian officials indicated that the missiles fell into five categories, with ranges between 350 and 2,000 kilometers, or between 200 and 1,250 miles. The missile launches were broadcast on Iranian state television, although it was not immediately clear how many of them hit their targets.

IRGC military leaders indicated that the exercises were intended mainly as a warning to Israel. “These exercises were designed to respond to threats made in recent days by the Zionist regime,” Iran’s armed forces chief of staff Major General Mohammad Bagheri said to IRNA.

Bagheri claimed that the missiles had “annihilated the chosen target,” and indicated that hundreds of other ballistic missiles had been prepared for use during the exercises.

Maj. Gen. Hossein Salami, the leader of the IRGC, claimed that the exercise was intended as “a serious warning to Zionist regime officials.” This was a reference to the Israeli government led by Prime Minister Naftali Bennett. “Make the slightest mistake, we will cut off their hand,” Salami said.

The military drill took place across Iran’s south and southwestern provinces. It was dubbed “Payambar-e-Azam,” or “Great Prophet.” It is being held at the same time that Iranian diplomats are pursuing nuclear discussions in Vienna, Austria, seeking to restore the 2015 “JCPOA” nuclear agreement.

Israel, which had previously indicated its dissatisfaction with the JCPOA, has made clear in recent months that it does not feel bound by diplomacy with Iran and will continue to pursue other means of constraining the Iranian nuclear program, no matter the outcome of the Vienna negotiations. Earlier in 2021, Israeli agents assassinated Iranian nuclear scientist Mohsen Fakhrizadeh. They were alleged to be behind several other high-profile explosions at Iranian nuclear facilities too.

The United States has also indicated that it may pursue sabotage or other unspecified options if negotiations fail.

While Iranian negotiators in Vienna have insisted that all sanctions from the Trump administration be dropped as a precondition to an agreement, the Biden administration has rejected this demand, noting that some of the sanctions were imposed on Iran’s ballistic missile program, which also violates a UN Security Council resolution. This impasse has led to limited progress in the ongoing negotiations, which are scheduled to resume on Monday, December 27.