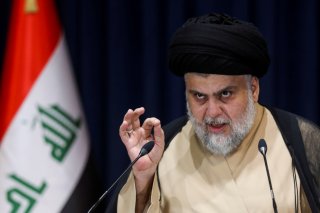 Muqtada al-Sadr, the firebrand cleric whose namesake political party is the largest in Iraq’s parliament, announced on Saturday that his allied legislators would submit a bill for consideration that would officially criminalize attempts to normalize diplomatic relations with Israel.

The cleric made the announcement on Twitter, where he indicated that his party “would soon announce a draft project to criminalize normalization and dealing with the Zionist entity [Israel] at all.”

Sadr argued that normalization with the Jewish state stemmed from “Israeli ambitions to dominate our beloved Iraq.” According to Rudaw, a Kurdistan-based Iraqi news outlet, Sadr claimed that preventing Iraqi relations with Israel was “one of the core reasons” that the Sadrist Movement, Sadr’s party, became “involved with the electoral process again.”

Sadr’s proposed legislation comes nearly two years after the initiation of the Abraham Accords, the peace deal that established formal diplomatic relations between Israel and the United Arab Emirates. Bahrain, a small Persian Gulf island state, immediately joined the Accords; Sudan and Morocco also normalized relations with Israel later in the year. Other Arab nations, most notably Saudi Arabia, are known to maintain furtive political and economic ties with Israel, although they have not yet formally normalized their relations. Other Middle Eastern countries, most notably Iran, have definitively ruled out such normalizations.

The proposed legislation appears to have come in response to a conference that took place in Erbil, the capital of Iraqi Kurdistan, in September. At that conference, around 300 Iraqi political and economic leaders discussed Baghdad’s entry into the Abraham Accords, which they suggested would lead to economic benefits for the country. Sadr harshly criticized that meeting, insisting that the country’s leadership “must forbid such terrorist Zionist meetings” and calling for the attendees to be arrested.

Sadr’s ties to Iran are a matter of continued controversy. During the U.S. occupation of Iraq from 2003 until 2010, the cleric fought against American troops and sought sanctuary within Iran from 2007 until 2011. However, his supporters also played a significant role in the October 2019 protest movement against the government of Iraqi prime minister Adil Abdul-Mahdi, whose foreign policy was closely aligned with Tehran’s. Sadr’s victory in Iraq’s October 2021 parliamentary elections largely came at the expense of pro-Iranian political parties and militia groups, who initially insisted that the results had been fraudulent and vowed not to accept them.