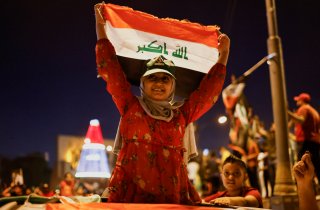 The Supreme Court of Iraq issued a ruling on Monday indicating that October’s parliamentary election results would stand, rejecting repeated appeals from the country’s Iran-backed Shi’a factions who had protested against the outcome.

“The Federal Court has decided to reject the complaint aimed at not having the results ratified, and to make the plaintiff bear the costs” of litigation, Iraqi Supreme Court judge Jassim Mohammed read from the ruling at the Supreme Court’s headquarters on Monday. “The verdict is binding on all authorities.”

The ratification of the results, two months after the final tally was determined, allows for the new Iraqi parliament to hold its first session in early January.

The country’s Iran-backed parties, many of which are affiliated with militias within the Popular Mobilization Forces (PMF), did poorly in the October election, losing significant ground to the movement led by Iraqi cleric Muqtada al-Sadr. Although Sadr is a Shi’ite, he has opposed Iranian influence within Iraq and seen his popularity increase after the country’s October 2019 protest movement, which led to the resignation of former Prime Minister Adil Abdul-Mahdi and the appointment of his successor, current Iraqi leader Mustafa al-Kadhimi.

Al-Kadhimi, a former dissident under Saddam Hussein’s rule and the leader of the country’s intelligence agency from 2016 until 2020, is a political independent who was appointed to lead the country in a transitional capacity. When seated, the next government will decide on a prime minister to succeed him, as well as a new executive cabinet.

Other significant victors in the 2021 election include the Kurdistan Democratic Party, which remains the largest party in the country’s autonomous Kurdistan region, as well as the State of Law coalition led by former prime minister Nouri al-Maliki.

The Conquest (Fatah) Alliance, the political arm of the PMF, won fifteen seats in the October election. That is a significant decrease from the forty-eight seats it had held in the previous government. Party leaders rejected the vote as a “fraud” and sued the electoral commission over alleged irregularities, leading to the Supreme Court’s decision.

Electoral turnout was 41 percent, the lowest since 2003. In the run-up to the vote, many Iraqis voiced their intention to boycott the election, claiming that all credible parties were corrupt, and no result would lead to significant change in the country.