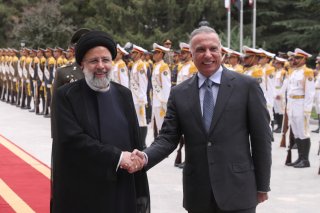 Iranian state television showed Kadhimi and his delegation, including Iraqi foreign minister Fuad Hussein, meeting with Iranian president Ebrahim Raisi at the Saadabad Palace, the presidential residence in Tehran. The previous day, Kadhimi had held a similar meeting with Saudi crown prince and de facto leader Mohammed bin Salman (MBS) in the coastal Saudi city of Jeddah. At the time, Kadhimi had reported that he and MBS had discussed “efforts to push towards calm and constructive dialogue” to “support … and strengthen … regional security and stability.”

On previous goodwill tours, Kadhimi has urged his counterparts in Riyadh and Tehran to de-escalate tensions, observing that hostility between the two regional powers often resulted in destabilizing conflict within Iraq due to hostility between the two larger powers. Iran and Saudi Arabia have not enjoyed formal diplomatic relations since January 2016, when Saudi Arabia executed dozens of Shi’a political prisoners, including Shia cleric Nimr al-Nimr. In response to those executions, an Iranian mob torched Saudi Arabia’s embassy in the city, prompting Riyadh to sever relations.

Iran has long maintained a complicated relationship with Iraq. Since the U.S.-led invasion of Iraq in 2003, Iranian influence within the country has grown substantially. After the rise of the Islamic State (ISIS) terror group in 2014, Iran organized, funded, and led the Popular Mobilization Forces (PMF) militias against them. Following the territorial defeat of ISIS, however, Iraq’s pro-Iran faction has increasingly clashed with Iraqi nationalists intent on reducing Iranian influence in the country’s politics. Iraq has also functioned as a battleground between Iran and the United States, as both pro-Iranian militias and U.S. troops are present in the country and are periodically targeted by missile strikes from the opposite side.

On previous occasions, Iraqi leaders have decried the use of their country as a battlefield for regional tensions, and have urged restraint from all parties. Iraqi mediation between Riyadh and Tehran led to a series of summit meetings in Baghdad in 2021, intended to decrease hostility and establish bilateral communications. Although the fifth round of these negotiations was held in April and Iranian officials have hinted that further discussions might follow, the Baghdad talks have failed to restore broader ties between the two governments.