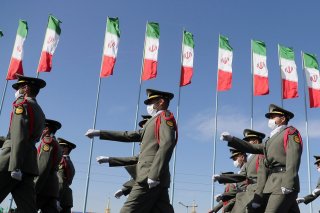 Studies in political science indicate that tyrants want to build a regime without end. In doing so, they need a good succession plan, often called the "keep it in the family" tactic.

There are indications that Ayatollah Ali Khamenei, the supreme leader of the Islamic Republic of Iran, is preparing to use this approach. Most notably, recent reports from official Iranian media used the title of “Ayatollah”—a high rank in the Shia clerical hierarchy—for Mojtaba, Khamenei's son. Mojtaba’s unmerited promotion from the lower rank of “Hujatuleslam” to the Ayatollah should be viewed as part of Khamenei's plan to groom his son as the next supreme leader. This should not be a surprise, as Khamenei’s track record as supreme leader reveals that he has worked on this plan since he first came to power in 1989.

After succeeding Ayatollah Ruhollah Khomeini, the founding father of the Islamic revolution, Khamenei started building a system of absolute rule in Iran, a religious dictatorship based on the doctrine of Velayat-e Motlaghe faqih. This authoritarian Shia Islamist doctrine justifies the absolute rule of the clergy (faqih) over the state until the return of Mahdi, the Shia messiah. To be clear, the theory of Velayat-e Faqih was first applied to Iran’s political system by Khomeini in 1979. However, Khamenei has expanded the authority of the Faqih to “Motlaghe” (absolute), turning the already authoritarian regime into a terrifying ruling system that derives its legitimacy from God, with people’s votes playing no role in the selection of Vali Motlaghe Faqih. Even worse, the Vali Motlaghe Faqih, or clergy, has the right to “control people's lives, wealth, and honor.”

After consolidating power, Khamenei started a brutal terror campaign to eliminate political opponents. He removed the old guard from key positions and replaced them with his own loyalists, a common practice used by tyrants to ensure they are the only game in town when they enter power. Influential figures, such as Ahmed Khomeini, the son of Ayatollah Rohullah Khomeini, who was a vocal critic and considered plotting against Khamenei, mysteriously died. In what became known as “chain murders,” Khamenei’s political opponents and many others around the core of power were murdered. Ayatollah Akbar Hashemi Rafsanjani, one of the most influential figures in the history of the Islamic Republic who was known as the kingmaker, was also politically sidelined. Meanwhile, Khamenei built his own patronage system, a ruthless campaign that became known as the de-Khomenificaton of Iran’s politics (Khomeini zodaee).

Khamenei then decided to bring the population under his total control to prevent discontent and turn Iran into a prison state. Since then, he has tried to isolate Iran from the rest of the world by blocking the nation’s access to information. For instance, Khamenei’s regime recently signed a twenty-five-year strategic partnership with the Chinese Communist Party (CCP), which entails cyber cooperation and promises to create a national Internet for Iran. The deal also obliges Iran to use the censorship technology and digital surveillance systems that the CCP employs in Xinjiang province to suppress Uighur Muslims. China’s technological support will help Khamenei further suppress dissidents and tighten the regime’s control.

Khamenei has also tried to isolate Iran from global economic trends. He introduced the “resistance economy,” a policy of total economic self-reliance, which disconnects Iran from the global economy. After all, isolating the nation is a common and effective move by tyrants who want to endure and build a regime without end.

At the same time, Khamenei has tried to build a cult of divinity designed to enforce the idea that he has the divine right to rule. Since Khamenei lacks Khomeini's charismatic personality, he has tried to rewrite a narrative that would give him divine legitimacy and ascribe unworldly powers to him. Friday prayer imams were instructed to recite stories and tall tales about “Khamenei working miracles,” insinuating that he has cured young children of jaundice and claiming he met with the Hidden Imam while in a hospital. National TV channels frequently quote Vladimir Putin, the Russian leader who said he “felt like he was meeting Jesus Christ” when he visited Tehran and met Khamenei in 2015.

Finally, Khamenei has been trying to obtain a nuclear weapons arsenal to make the regime an unstoppable force and avoid following in the footsteps of other tyrants such as Saddam Hussein and Muammar Gaddafi, guaranteeing his regime’s survivability with his son at the helm.

Despite all these efforts, he has not been able to achieve complete success. The process of de-Khomeinification—removing the old guards from key positions—is far from complete. Although sidelined, Khomeini loyalists are still an influential political force, and, on many occasions, they have forced Khamenei to make unwelcome compromises.

Khamenei’s delusional policy of a “resistance economy,” along with the regime’s systematic corruption and Western sanctions, have resulted in economic crises, high inflation, and scarcity in Iran, worsening his image among Iranians. Khamenei’s ruling system has become a byword for corruption and dysfunctionality among Iranians.

Moreover, Khamenei has been unable to block the nation's access to information, at least so far. Lastly, the nation considers his project of building a cult of divinity as “an attempt to buy credit for a discredited leader.”

Perhaps his only success is the nuclear program, which he could bring up to the threshold level, although he has not yet been able to develop actual nuclear weapons. The nuclear “treasured sword,” as North Korean leader Kim Jong-un often refers to his nuclear arsenal, could similarly help Khamanei threaten the free world if his succession plan faces pushback.

Above all else, Mojtaba is highly unpopular among the nation due to his role in instructing the Basij militia force to violently crack down on Green Movement demonstrators in 2009, which resulted in thousands of deaths. The slogan “Die, Mojtaba, may you never achieve leadership” is very popular among Iranians.

It is also worth mentioning that Khamenei naming his son as his successor would blatantly disregard Ayatollah Khomeini’s portrayal of hereditary succession as a symbol of corruption.

Whether Mojtaba will succeed his father or not, only time will tell. What is quite clear is that such a decision could trigger a popular uprising, and opponents of Khamenei would fight fervently against him to prevent it.