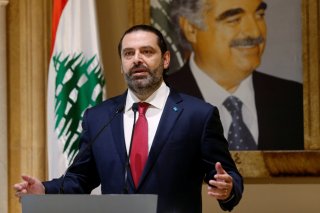 Two weeks before Lebanon is scheduled to hold its first election in four years, the country’s electoral scene—long divided between Lebanese Sunnis, Shia, Maronite Christians, Druze, and other ethno-religious groups in an intricate power-sharing arrangement—remains heavily divided, largely due to the main prospective Sunni candidate’s decision to retire from politics earlier in the year.

Saad Hariri, Lebanon’s former prime minister from 2009 to 2011 and again from 2016 to 2020, announced in January that he and his Future Movement would not participate in the upcoming election, citing malign Iranian influence and frustration in his interactions with Lebanese president Michel Aoun and members of Hezbollah as reasons for his withdrawal from politics. His exit has divided former supporters of the Future Movement into smaller political factions. Smaller political parties including Beirut Tuqawem and Sawa Li Lubnan have emerged in the vacuum, while some existing minor parties, including Lebanese billionaire Fouad Makhzoumi’s National Dialogue Party, have sought to attract former Future Movement supporters.

Before its exit from politics, the Future Movement dominated the predominantly-Sunni areas of Lebanon, including Beirut, Tripoli, and Sidon, the country’s three largest cities. However, the Future Movement has also attracted opposition from many Sunnis for its role in the events leading up to Lebanon’s 2019 financial crisis, which decimated the value of the Lebanese pound and plunged three-fourths of the country’s citizens into poverty. Many Lebanese politicians have been perceived by some as corrupt oligarchs who looted the country’s treasury prior to the collapse.

Following Hariri’s resignation in 2020, two successive governments led by Hassan Diab and Najib Mikati largely failed to stabilize the buying power of the pound, which trades at roughly 25,000 per U.S. dollar. Prior to the financial crisis, the pound was valued at 1,500 per U.S. dollar; this has remained the country’s official exchange rate, pushing most currency transactions underground.

Lebanon’s election is scheduled for May 15.