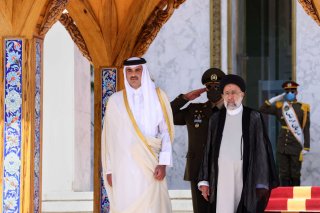 Iran’s Foreign Ministry denied on Saturday that the country intended to “compromise” with the P5+1 powers during its negotiations in Vienna, Austria, insisting that its negotiating positions had not changed and placing the onus on the United States and Europe to meet Tehran’s conditions.

Rumors that Iran would seek compromise with the P5+1—the negotiating bloc consisting of the five permanent members of the United Nations Security Council and Germany—first circulated after Iranian supreme leader Ali Khamenei met with Sheikh Tamim bin Hamad Al-Thani, the emir of Qatar, in Tehran over the weekend. The German newspaper Handelsblatt reported that the supreme leader had conceded that a compromise could be necessary to resolve the issue of “the Iranian nuclear file.”

Saeed Khatibzadeh, a spokesman for the Iranian Foreign Ministry, claimed that the newspaper’s reporting was erroneous, arguing that a mistranslation of Khamenei’s remarks had occurred. The spokesman reported that Khamenei had told Al-Thani that “the negotiations must yield results, not waste time,” and that “the Americans know what they need to do”—two quotations suggesting that Iran’s position on the nuclear accord has remained constant.

“It is very clear from the context of the leader’s remarks that the ball is in the [United States’] court,” Khatibzadeh said in remarks to Iran’s government-aligned Tasnim News Agency. He added that Washington “must make wise political decisions to fulfill its obligations” and reach a deal.

Qatar’s Foreign Ministry also suggested that Handelsblatt’s remarks had originated from a mistranslation and that Khamenei had not referenced a compromise with the United States.

However, Qatari officials, who have played a significant role as an intermediary between the United States and Iran, have also offered positive assessments of the ongoing negotiations, with Foreign Ministry spokesman Majed Al-Ansari claiming that Doha was “very optimistic” about the prospects for the renewal of the Joint Comprehensive Plan of Action (JCPOA), the nuclear agreement negotiated in 2015 that exchanged sanctions relief on Tehran for its compliance with international nuclear safeguards.

“We hope an agreement that satisfies all parties and guarantees Iran’s right to [the] peaceful use of nuclear energy will be reached as soon as possible,” the spokesman said.

While the nuclear negotiations in Vienna have made considerable progress over the past year, they have remained stuck over the issue of Iran’s Islamic Revolutionary Guard Corps (IRGC), which the administration of President Donald Trump designated as a terrorist organization. Iran has pushed the administration of Trump’s successor, President Joe Biden, to undo the designation. At the same time, many Americans have pressed Biden to keep it, complicating his course of action.