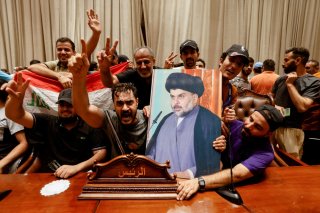 Hundreds of Iraqi demonstrators affiliated with the movement of Shia cleric Muqtada al-Sadr stormed the country’s parliament building in Baghdad on Wednesday to protest against the parliament’s recent nomination for prime minister, who they claimed was too strongly aligned with Iran.

The parliament building, located in Baghdad’s high-security Green Zone, was empty when the protesters entered, and the building’s security guards may have allowed the protesters to enter, according to Al Jazeera. In order to access the building, demonstrators first stormed the Green Zone, passing through the heavily guarded gate to the area and overcoming guards with tear gas and water cannons.

Once on the parliament floor, the demonstrators held signs, waved Iraqi flags, and chanted slogans in opposition to Mohammed Shia al-Sudani, Iraq’s former Human Rights Minister from 2010 to 2014 and former governor of the country’s southeastern Maysan province from 2009 to 2010. Al-Sudani had been nominated to the prime ministership by the Coordination Framework, a pro-Iran parliamentary alliance strongly opposed to al-Sadr and his adherents.

Iraqi prime minister Mustafa al-Kadhimi immediately condemned the intrusion into the parliament building, ordering the demonstrators to “immediately withdraw” and vowing that security forces would take action to “prevent any harm to security and order” if they remained. Shortly after his announcement, al-Sadr wrote on Twitter that the country had heard the protesters’ anti-Sudani message and instructed the occupants to return to their homes, leading to their departure from the building.

The Sadrist Movement, the formal name for al-Sadr’s electoral alliance, won seventy-three seats in Iraq’s last parliamentary election in October 2021, making it the largest party in parliament and the first choice to nominate and elect a president and prime minister and form a government. However, the party could not secure a two-thirds majority for any presidential choice, leading to the expiration of the timeframe nominally devoted to the selection process in the Iraqi constitution and creating a political deadlock.

To resolve the deadlock, all seventy-three members of al-Sadr’s party simultaneously resigned, effectively passing the majority in parliament to the pro-Iran bloc but carrying the implicit warning that al-Sadr remained widely popular among Iraqis and could easily instigate demonstrations against any leader perceived to be too friendly towards Tehran. The protest on Wednesday, in which demonstrators suddenly flooded the parliament building but left within minutes of al-Sadr’s statement, appears calibrated to reinforce that warning.

Before al-Sudani is confirmed as prime minister, the pro-Iran coalition must elect a president with a two-thirds majority, a difficult process that will require it to make tactical alliances with lawmakers from Iraq’s numerous minor factions.