Pompeo: Trump’s Iran Strategy Has Not Achieved Its ‘Ultimate Objective’ 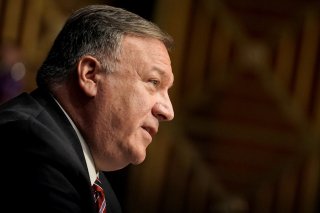 Secretary of State Mike Pompeo told the Senate that the Trump administration’s strategy towards Iran has not achieved its “ultimate objective,” in Pompeo’s first congressional testimony in months.

The Senate Foreign Relations Committee met on Thursday to discuss the State Department’s budget request for next year. Pompeo, testifying before U.S. lawmakers for the first time since February, made Iran a centerpiece of his testimony.

“The Trump administration places our founding principles at the core of diplomacy,” Pompeo said in his opening speech. “We’ve evaluated the world with the same realism that the American Founders did. We see the Islamic Republic of Iran for what it is—an aggressor, not a victim.”

He acknowledged several minutes into the speech that Russia is also “a destabilizing authoritarian force” and China is “the central threat of our times.”

Pompeo claimed that his State Department has gone “full bore on our maximum pressure campaign” against Iran, which seeks to use economic sanctions and diplomatic pressure to isolate the Islamic Republic.

But the secretary of state offered a mixed review of the strategy in response to a question from Sen. Lindsay Graham (R-S.C.) later into the testimony.

“The sanctions have clearly had an impact,” Pompeo said. “It has diminished their capacity to underwrite Hezbollah, Shia militias in Iraq, but clearly hasn't achieved the ultimate objective, which is to change the behavior of the Iranian regime.”

Pompeo had earlier claimed that maximum pressure had “slashed” Iranian oil revenues by over ninety percent and “rallied nations to our side” against the Iranian-backed militia Hezbollah.

He also said that there was work to be done on snapping back United Nations sanctions on Iran, which are due to expire in October 2020.

“We think it decreases stability in the Middle East, we think that would threaten Israel, and we're confident that it reduces U.S. security as well,” Pompeo said in response to a question by Sen. John Barrasso (R-Wyo.) about the sanctions expiring.

Russia, China, and European nations had slammed Pompeo at a UN Security Council meeting last month for his proposal to snap back the sanctions.

Republican senators laid much of the blame for the present situation at former President Barack Obama’s feet.

Sen. Ron Johnson (R-Wis.) said that the 2015 nuclear deal had “emboldened” Iran and “changed their behavior for the worse,” while Sen. David Perdue (R-Ga.) claimed that former secretaries of state Hillary Clinton and John Kerry “oversaw probably one of the most major withdrawals in foreign policy from the global stage that America has ever seen.”

Democrats, however, argued that the decision to leave the deal with Iran made matters much worse.

“We have isolated ourselves on Iran,” Sen. Ben Cardin (D–Md.) told Pompeo.