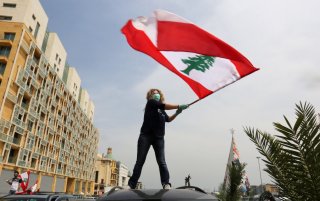 In recent weeks, Lebanese citizens have held growing demonstrations against a proposed law that would institute further capital controls in the country, placing new restrictions on Lebanese citizens’ ability to withdraw money from their bank accounts.

The capital controls law comes nearly three years after the country’s devastating financial meltdown, which wiped out billions of dollars in Lebanese banks and plunged three-fourths of Lebanon into poverty. In the aftermath of the collapse, the country’s banks moved to impose their own internal capital controls by limiting the amount of money that could be withdrawn per day and restricting exchanges from Lebanese pounds to dollars to the country’s official exchange rate, well below its real exchange rate.

Before the financial collapse, the Banque du Liban, Lebanon’s central bank, had sought to stimulate the country’s financial sector by guaranteeing exceptionally high-interest rates to Lebanese commercial banks. In turn, the commercial banks offered similarly high-interest rates to depositors, lending their deposits to the central bank and making Lebanon one of the wealthiest countries in the Middle East. However, in the years leading up to the financial collapse, the high-interest rates had increasingly been paid for by the investments of new depositors—an arrangement that many observers compared to a Ponzi scheme. After the collapse, officials estimated that around $70 billion in Lebanese deposits had evaporated.

The Lebanese financial meltdown has sharply disrupted public life in the country, causing regular power outages and leading to skyrocketing food and fuel prices. Lebanon’s financial difficulties were compounded by the ammonium nitrate explosion at the Port of Beirut in August 2020, which leveled much of the capital city’s downtown area and killed more than 200.

Lebanese officials have argued that the new capital controls law had been proposed at the recommendation of the International Monetary Fund (IMF), which has sought to restore stability in Lebanese banks as part of a broader package of economic reforms. IMF officials have made the capital controls plan a prerequisite for a bailout, meaning that lawmakers will most likely pass it despite popular pressure. Other IMF requirements include a bank restructuring and a new auditing process for the banking sector, as well as a re-evaluation of the country’s exchange rate to match the Lebanese pound’s real value.

Lebanese banks have embraced the capital controls law, but they have also criticized the measures intended to provide greater transparency in the banking sector, leading to a standoff.

In the aftermath of the financial collapse, an estimated $6 billion was taken from surviving Lebanese banks and moved abroad.