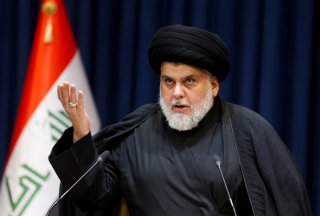 Iraqi cleric-turned-political leader Muqtada al-Sadr declared on Wednesday that he supported the dissolution of Iraq’s parliament and the holding of new elections, urging his followers to continue their sit-in inside the country’s parliament building in Baghdad until his two demands were met.

Sadr’s remarks, delivered during a televised address from the holy Shia city of Najaf, came less than a week after the cleric’s followers breached Iraq’s heavily fortified Green Zone and stormed the parliament building. Although the building was empty at the time, the protesters have occupied the building for several days, setting up tents and food supply lines in order to prolong their sit-in. The demonstrations have obstructed the parliament’s function and led to condemnation from Iraqi leaders and elected officials, but Iraqi security forces have not earnestly attempted to storm the building and remove the demonstrators by force.

The sit-in in the parliament building came as a response to Iraq’s Coordination Framework, which gained the majority in parliament after Sadr’s bloc resigned their seats. The bloc resigned after the parliament attempted to nominate a prime minister who the cleric viewed as too friendly toward Iran. Although the Sadrist Movement no longer holds sway in parliament, it has maintained an active following among the Iraqi public, and the Sadrist Movement’s mass resignation from parliament came with the tacit threat that the group could still disrupt functions of state if the Coordination Framework tried to disregard its priorities.

In his remarks on Wednesday, Sadr insisted that he had been willing to compromise with the Coordination Framework to elect a balanced government but that further negotiations with the pro-Iran group were impossible due to the two factions’ wildly divergent interests.

“Don’t believe the rumors that I don’t want dialogue with them,” Sadr said. “But we have already tried and experienced dialogue with them. It has brought nothing to us and the nation, only ruin and corruption.”

For this reason, he insisted that new elections be held.

Iraq’s last election cycle in October 2021 resulted in a decisive victory for the Sadrist Movement, which gained seventy-three out of the parliament’s 329 seats. However, the party was unable to nominate a president, which requires the approval of two-thirds of the parliament. Following the Sadrists’ resignations, the Coordination Framework became the largest faction in parliament but it also lacks a two-thirds majority, requiring it to cut deals with smaller factions in order to advance its goals.

Sadr initially cut his teeth in politics during the U.S. invasion and occupation of Iraq, when he formed a powerful Shia militia, the Mahdi Army, to oppose U.S. coalition forces. The cleric later played an important role in the fight against the Islamic State (ISIS) terror group, and his movement grew in strength following the anti-Iran protests of October 2019. Today, Sadr is widely regarded as one of Iraq’s most powerful kingmakers, although he has never held any public position.