The U.S. Must Listen to Its Middle East Allies on Iran 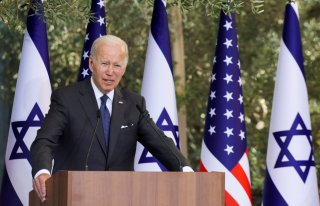 The Middle East catapulted back into the center of American politics this week with two startling events that put the United States into a place reminiscent of 1979, when the country was rocked by oil shocks and Iran’s street uprisings. First, the OPEC+ oil cartel announced plans to cut oil production by 2 million barrels per day, roiling global markets. Shrinking the supply of oil will drive up prices worldwide and worsen inflation. Sudden losses of consumer spending power usually provoke political upheaval.

Across Iran’s major cities, women took to the streets, burned their hijabs, and demanded an end to their second-class status allegedly mandated by Islamic law. The protests were so large, bold, and defiant, that security services started shooting. More than forty Iranian women lay dead, but the protests continue. As a result, Tehran may no longer be able to renew the nuclear agreement, and its ability to rein in the multi-national terror groups that it funds may be sharply diminished. The regime will need the hardliners to maintain power.

Both events call into question the credibility of the United States across the Middle East. The gap between Saudi Arabia—one of America’s oldest allies—and the Biden administration continues to widen, despite the many attempts of National Security Advisor Jake Sullivan and others to repair the relationship. Indeed, President Joe Biden's visit in July had no helpful effect. The announcement of the OPEC+ production cut, coming less than a month before a pivotal midterm congressional election, suggests that Saudi Arabia has little interest in sparing the Biden administration political pain. American criticism of the horrible murder of Jamal Khashoggi, a Saudi citizen and Washington Post columnist, remains intense—despite Crown Prince Mohammed bin Salman’s unprecedented official apology. This is the background music for OPEC+’s decision. On the other hand, Moscow is dependent on oil sales to fund its war in Ukraine, and Russian leader Vladimir Putin needs the revenue to maintain his grip on power. Higher oil prices are good for Russia. OPEC+’s oil supply reduction is a sign of just how far apart Riyadh and Washington now are.

Meanwhile, the Saudis and other Gulf leaders are alarmed that the United States wants to seek peace with Iran, which they see as a dangerous neighbor threatening the peace and security of their own homelands. Iran-backed militants have carried out attacks in Saudi Arabia’s main oil-producing region, staged uprisings in Bahrain, and sent rockets from Yemen into Saudi and Emirati territories, murdering and maiming civilians.

Israel shares the concerns of the Gulf Arab leaders. David Barnea, the head of the Mossad, warned Washington in very direct terms:

Signing the nuclear agreement means that the terrorist regime will immediately receive about $6 billion, on top of $90 billion in the first year and many tens of billions more in the following years. Let's assume that only a small part of these additional funds will go to terrorism: even then, our challenge—and that of the whole world—to prevent terrorist acts will be enormous. This is one of the clear weaknesses of the agreement. The agreement will actually bring Iran closer to realizing its nuclear program—it is effective in the short term, but very dangerous in the long term.

From the outset of the war in Ukraine, Iran declared the invasion a legitimate response to Russian security concerns over actions taken by the United States and NATO. Iranian leaders and policy officials believe that Russia’s invasion of Ukraine could shake the architecture of the international system in a way that is ultimately conducive to Iran’s national interests.

Reports of Iran supplying Russia with drones seem plausible for one reason in particular: the closely aligned regimes are both fierce opponents of any form of political freedom and the rule of law.

The United States should return to the policies it has held for decades: preventing Iran from obtaining nuclear weapons, continuing to aid Iranian dissidents, and assisting Iranian unions and non-profits both inside and outside Iran. Washington must also continue to impose sanctions against those who act as agents for Iran’s deadly repression.

These policies will reassure U.S. allies while winning wide support among the American public. The world is crowded with other crises, especially the war in Ukraine and the global food and energy crises it has unleashed. The United States would be wise to avoid creating new crises.

Heading off a crisis before it fully emerges means continuing to isolate the tottering Iranian regime and rebuilding America’s strategic relationships with Gulf countries. It means returning to the policies that have reassured its allies for the past forty years.

American leadership is only possible when its allies broadly agree with its aims and methods. And Washington’s diverse allies in the Middle East are now speaking with one voice about the dangers of Iran. America should listen.

If it does not, the Biden administration may suffer a sudden loss of trust in America. It is not too late to change course and avoid a repeat of history.