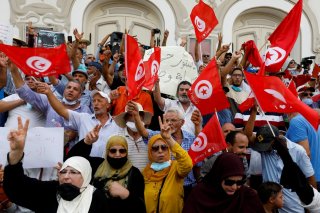 Kais Saied, the constitutional law professor-turned-President of Tunisia, announced on Wednesday that he had given himself additional powers outside of the limits of the country’s constitution, including the authority to rule by decree.

The announcement, published in Tunisia’s official gazette, declared that legislative texts would be “promulgated in the form of decrees signed by the President of the Republic.” It elicited immediate protests from Tunisia’s political opposition, including Rached Ghannouchi, the Speaker of Parliament and leader of Tunisia’s Ennahda (“Awakening”) Movement, a moderate Islamist party that held the most seats in Parliament prior to its dissolution.

Two months after the July 25 dismissal of Parliament—a move that opposition parties decried as illegal, leading to the country’s political crisis—the current impasse continues. After declaring a state of national emergency to justify his actions, Saied continues to hold near-total power in the country. From the outside, Tunisia’s political class and some of its Western partners, including France, have pushed Saied to appoint a prime minister to help resolve the crisis, but so far he has not.

Ennahda immediately rejected the latest announcements, with Ghannouchi declaring that the country’s constitution could not be changed outside of the normal process of law.

Prior to the crisis, Tunisia had also faced an enormous spike in COVID-19 cases, one justification for Saied’s declaration of national emergency. However, the country’s case rate has since receded.