Defund the FBI? Some Republicans Are Lashing Out at the Agency 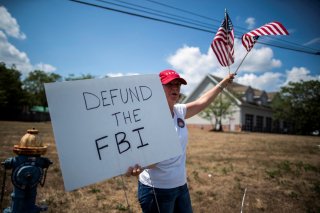 During the protests that followed the killing of George Floyd in 2020, some embraced the controversial call to “defund the police.” While the number of elected Democratic officials who endorsed that position was relatively small—President Joe Biden, for instance, never openly supported such calls—it’s been a Republican strategy in the last two election cycles to tie Democrats to the slogan.

However, ever since the FBI took evidence from former President Trump’s Mar-a-Lago estate earlier this month, some Republicans have either used “Defund the FBI” as a slogan or have called for the red states to not cooperate with the agency. The oft-controversial Rep. Marjorie Taylor Greene (R-GA) tweeted in favor of defunding the FBI, while New York Congressional candidate Carl Paladino said in a radio interview that Attorney General Merrick Garland “probably should be executed.”

One Republican went even further and has been kicked off Twitter as a result. Luis Miguel (not to be confused with the Mexican singer, whose real name is Luis Miguel Gallago Basteri), a state legislative candidate in Florida, was permanently suspended by Twitter this week after appearing to call for violence against federal agents, Florida Politics reported. “Under my plan, all Floridians will be able to shoot FBI, IRS, ATF, and all other federal troops on sight,” the candidate tweeted. “Let freedom ring.”

Miguel told the site that he stands by the proposal and that the suspension, “doesn’t affect (him) at all.” He added that the IRS has been “weaponized by dissident forces.” Miguel’s Instagram page appears to have been taken down, although his Facebook page remains. A challenger to incumbent Rep. Bobby Payne, Miguel appears to be something of a fringe candidate.

Democrats in the state denounced the statement, per Florida Politics. “DeSantis-supporting Republicans are now openly calling for violence against law enforcement and the federal government,” Florida Democratic Party spokesperson Kobie Christian told the site. “Luis Miguel models himself on the right-wing extremism that Ron DeSantis has used to elevate himself onto the national stage.”

“If elected, Miguel is promising to pass legislation encouraging ‘on sight’ shooting of law enforcement officials. Governor DeSantis needs to denounce this plan, this candidate, and the escalating attacks on the men and women of law enforcement who uphold our laws.”

Meanwhile, the “Defund the FBI” rhetoric has been denounced by everyone from President Biden to former Vice President Mike Pence and Rep. Dan Crenshaw (R-TX),

“It makes us seem like extremist Democrats, right?” Crenshaw said in a TV appearance. “And so Marjorie and AOC can go join the defund the law enforcement club if they want. Ninety-nine percent of Republicans are not on that train.”