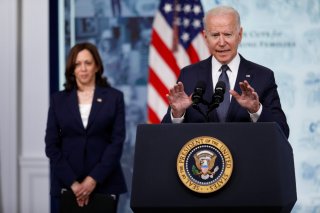 The expanded child tax was put into place by the American Rescue Plan Act in the spring of 2021, the piece of coronavirus relief legislation signed by President Biden shortly after he took office. The legislation made the tax credit fully refundable while putting into place monthly payments for the last six months of 2021.

Democrats had hoped to extend the credit past 2021, and revelations from a new book show that Senate Republican leader Mitch McConnell was worried that the child tax credit would be so popular that the Republicans would have trouble ever unwinding the bill even if they recaptured Congress in the future.

However, the Build Back Better bill, which would have extended the credit by one more year, died in the Senate in December, causing the child tax credit to revert to its previous level at the start of 2022. There have been reports of continuing talks in Congress about reviving the child tax credit, but they don’t appear to have much momentum, especially with Democratic Senator Joe Manchin (D-WV) remaining opposed to the return of the credit.

Now, a pair of former Treasury secretaries from Democratic administrations, Robert Rubin and Jacob Lew, have written an op-ed in the New York Times advocating for something resembling the expanded child tax credit, although in a way that isn’t inflationary. Rubin was Secretary of the Treasury in the Clinton Administration, while Lew held that job in the Obama Administration.

“We both served as secretary of the Treasury, and we have been associated with economic policies that are both fiscally responsible and invest in our future. It is our strong view that Congress should act this year to ease the financial strain on low-income families raising children and that these policies should be paid for. This is not just morally right, but a critical investment in our nation’s economic future,” the secretaries wrote.

The two say that Congress “should prioritize making the Child Tax Credit available to families with low or no earnings through a provision known as refundability, and expanding support for child care.” However, the former secretaries also say that they don’t support reinstating the same credit that was in place in the American Rescue Plan Act.

“In permanent legislation that includes deficit reduction, it will most likely be too costly to include a full Rescue Plan expansion of the credit,” the op-ed said. “But even a partial increase would help. The most critical step, where benefits to families and society far exceed the comparatively low costs, is permanently making the entire credit available to the lowest income children. For example, just making the current $2,000 credit refundable would reduce child poverty by roughly 20 percent. Refundability is the most consequential way to reduce child poverty, and we urge lawmakers to make it permanent.”

It’s unclear if any such legislation is currently in the works in Congress.