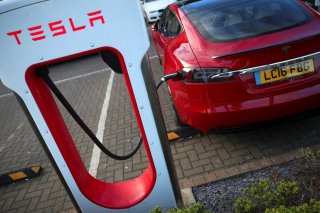 Just two weeks ago, Patrick De Haan, head of petroleum analysis at GasBuddy, predicted that the national average gas price would “likely fall back under the critical $4 per gallon mark.”

Much to the dismay of American drivers, that has not come to fruition—the average gas price has stayed above the $4.10 per gallon level, according to AAA data.Adding to concerns is the fact that crude oil is down more than $20 a barrel—or a decline of almost 20 percent from its March peak—but the nation’s gas prices have remained stubbornly elevated.

As reported by Yahoo Finance, this high-inflationary environment appears to have made Americans more open to the idea of purchasing an electric vehicle (EV). Case in point: the eye-opening results from an online survey conducted by CarGurus.com that showed consumer sentiment toward EVs remains robust.

In fact, 40 percent of respondents admitted that they expect to own an EV in the next five years, compared to just 34 percent a year ago. Over the next ten years, 60 percent acknowledged that they would own an EV, compared to 40 percent the year prior. Overall, those respondents who are “excited about development” in the EV space trended higher to 51 percent, up from 45 percent a year ago.

“Consumers know that EVs are the future,” Madison Edwards, CarGurus.com director of consumer insights, told Yahoo. “But as gas prices were increasing in March, and moderating in April, we saw that expectations to own in the next 10 years started increasing once again,” she continued.

Although Teslas remain the most sought-after vehicles on the market, Edwards did note that other automakers are making positive headway. “Cleary Tesla is always top of mind when it comes to electric vehicles, and in every study we’ve done … Tesla is at the top of the list, but Tesla's lead has been shrinking,” she explained. “We actually see that Toyota gets a lot of credit for being an early innovator in the hybrid space,” she added.

According to the survey’s results, 45 percent of potential EV buyers pinpointed Tesla as their top choice, followed by Toyota at 44 percent, Honda at 40 percent, and Ford at 31 percent.

Cars.com found that EV searches have surged nearly 200 percent on its platform. “Recent macro events including historic inflation, rapidly rising gas prices, and debate over oil production and supply have transformed consumers’ mere curiosity about EVs to an unprecedented level of interest,” Jenni Newman, editor-in-chief for Cars.com, stated in a release.