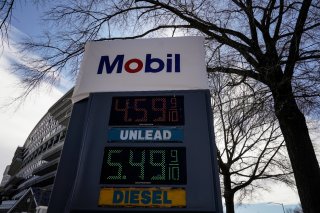 Gas prices have been abnormally high throughout the spring, and the added cost that it is placing on Americans will likely be a major factor in both the direction of the economy this year and the midterm elections.

However, gas prices have begun to taper off from their soaring heights earlier this spring. According to GasBuddy, as of Monday, gas prices in the United States had declined for the fourth straight week. The average price was $4.06 a gallon as of Monday, a drop of $0.036 cents from the week before. While remaining above $4 a gallon, the national average has dropped $0.211 cents over the course of the last month, per GasBuddy’s data.

“We’ve now seen the national average price of gasoline decline every week for the last month, a feat we most likely would not have expected ahead of summer and given the continued turns in Russia’s war on Ukraine. However, the downturn could slow or could even reverse in the days ahead if the rally in oil prices continues,” Patrick De Haan, head of petroleum analysis at GasBuddy, said in a blog post on Tuesday.

However, De Haan warned that the price drops may be temporary, as oil prices have begun rising again. “A barrel of crude is now $14 higher than it was last week, as the European Union weighs placing harsher sanctions on Russia,” he said. “This could further tilt the delicate balance of supply and demand in the wrong way, potentially sending oil prices up significantly if implemented. The path forward at the pump remains murky, however, with many possible outcomes, so motorists should be prepared for a bumpy ride.”

Another gas price report this week, from AAA, found that the national average has dropped to $4.08 a gallon. The report also noted that, with prices dropping below $4 in some parts of the country, demand is beginning to return. “As the days get longer, the weather gets warmer, and pump prices dip from their record highs, consumers feel more confident about hitting the road,” said Andrew Gross, an AAA spokesperson. “But these lower pump prices could be temporary if the global price of oil increases due to constrained supply.”

AAA also announced a one-of-a-kind promotion with an unlikely partner: Krispy Kreme Donuts. The donut chain, for the next three Wednesdays through May 4, will “lower the price of a dozen Original Glazed donuts to the national average that AAA reports each Monday.”

In order to offset gas prices, President Joe Biden announced the largest release of oil in the history of the Strategic Petroleum Reserve at the end of March, while also challenging oil companies to step up their production.