Gas Prices Are Falling, But Are Biden’s Appeals the Reason Why? 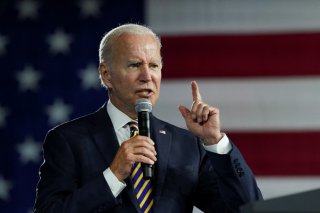 Gas prices have been surging for most of the year, with the average price going over $5 a gallon for the first time in history in mid-June.

Throughout it all, the Biden White House has been taking various measures to try to get the prices down, from tapping the Strategic Petroleum Reserve to preparing to put pressure on OPEC+ countries to, last month, proposing a three-month gas tax holiday.

Biden did something else around the July 4 holiday: He appealed directly to gas station owners to lower prices. “My message to the companies running gas stations and setting prices at the pump is simple: this is a time of war and global peril,” the president said on Twitter July 2. “Bring down the price you are charging at the pump to reflect the cost you’re paying for the product. And do it now.”

The president was assailed for this, by everyone from Jeff Bezos to Republicans in Congress to the oil and gas industry. But in the days afterward, a surprising thing happened: Gas prices started going down. Is there a correlation? Probably not.

As of Monday, gas prices dropped for the third consecutive week, dropping 10.4 cents to $4.78 per gallon. According to GasBuddy, the drop had a lot more to do with the global price of oil than anything else. “As expected, and for the third straight week, average gasoline prices have fallen to their lowest level in over a month. The price of wholesale gasoline has plummeted, providing price relief as millions of Americans hit the road for the holiday weekend,” Patrick De Haan, head of petroleum analysis at GasBuddy, said in a blog post.

“While we may see prices decline into this week, the drop could fade soon if oil prices reverse, especially with strong demand over the holiday. For the time being, Americans are spending nearly $100 million per day less on gasoline than when prices peaked a few weeks ago, and that’s well-needed relief at a time when gas prices remain near records,” he continued. De Haan added on Twitter that seven cities, all in either Georgia or Texas, had average prices under $4.

According to AAA, the average price dropped to $4.75 by Thursday, which by AAA’s methodology was a five-cent drop from earlier in the week. “Crude prices continue to face strong headwinds amid broad market concerns regarding the potential for economic growth to slow or stall due to rising interest rates and inflation. A lower economic growth rate than expected could cause crude demand to decline, leading prices to follow suit,” AAA noted.

In California, specifically, gas prices have dropped for twenty-three consecutive days, as of Thursday.