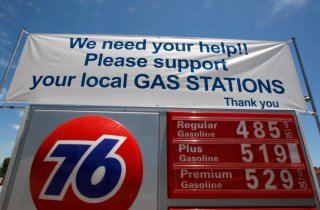 There is plenty of complaining going around due to $4 and $5 gas prices. But keep in mind that those prices at the pump could be seen as a bargain in Los Angeles County, where a gallon of fuel is currently sitting north of $6.

According to Fox 11 in Los Angeles, the county did get some relief over this past weekend when the average price of a gallon of regular gas decreased to $6.069. That tiny move, though, broke a streak of thirty-two days of consecutive increases.

Patrick De Haan, head of petroleum analysis for GasBuddy, wrote that it didn’t take long for Los Angeles to reach these eye-opening gas-price levels. “In less than three weeks, the average price of gasoline in Los Angeles has surged by an average of $1 per gallon, blowing past $5 and now reaching $6 per gallon on refinery issues and Russia’s war on Ukraine,” he said in a press release. “While I’m hopeful we won’t go much beyond this, there’s not much light at the end of the tunnel for now.” Largely due to high gas taxes and a cap and trade program that assesses a premium based on vehicle emissions, California is generally known to have some of the highest gas prices in the nation.

Debit Cards on the Way?

If Gov. Gavin Newson and most state Democrats have their way, there could be a $400 tax refund in the form of a debit card coming to every vehicle owner in the state. “That direct relief will address the issue that we all are struggling to address, and that’s the issue of gas prices,” Newsom said in a Twitter video. “Not only here in our state, but of course, all across this country.”

According to Newsom’s office, the refunds would include $400 for each registered vehicle—up to two—that a California resident owns. That means that eligible individuals could receive up to $800 in total from the state to help offset high gas prices.

Those who own electric cars would also qualify, but most businesses with fleets of vehicles would not be eligible. Newsom’s office has also proposed offering sizable grants—up to $750 million—to make public transit free to the public for up to three months. Another $523 million would be used to halt a scheduled increase in the state’s gas tax this summer.