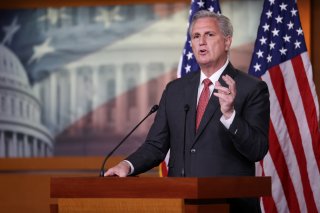 When the expanded child tax credit was being debated in Congress in the spring of 2021, it was almost entirely Democrats who supported the bill of which it was a part, the American Rescue Plan Act, and almost entirely Republicans who opposed it. The bill passed almost completely along party lines, but when the Build Back Better package, which would have extended the child tax credit another year, was up for a vote, Sen. Joe Manchin (D-WV) opposed the bill and killed it, along with hopes for a continued credit.

Now, a new poll seems to be indicating that those who received the credit favor Republicans in this fall’s midterm elections.

According to a Morning Consult poll released Wednesday, among voters who received the child tax credit in 2021, 46 percent say they will back a Republican in November, compared to 43 percent who say they will back a Democrat. Among “all voters,” the same poll says the advantage is tied 43-43.

Democrats had an advantage with child tax credit recipients previously, the poll said.

“Voters who received expanded child tax credits payments in 2021 ended the year more likely than not to support Democratic candidates for Congress in this year’s midterm elections. But months after that benefit expired, a new Morning Consult/Politico survey shows Republicans have made up that ground,” the poll description said.

The poll seems to indicate that voters are more upset with the Democrats for failing to extend the credit than they are with Republicans for never supporting it in the first place. However, the tied result on the overall generic ballot question would seem to be good news for Democrats, who many expect to enter the midterm elections at a disadvantage. This is due to both historic trends for the party in power to lose ground in the first midterm elections, and because of low approval ratings for President Joe Biden.

“As Americans of all stripes have endured the rising cost of living, many voters who received the payments — a group that leans Democratic and makes up just under one-fifth of the electorate — say they’re feeling economic strain,” the poll said.

It added that 72 percent of child tax credit recipients said that the expiration “had at least a ‘minor’ impact on their financial security,” while 55 percent of those surveyed said they disapprove of the president’s handling of the economy.

In an op-ed published last week, a former Republican National Committee staffer argued that the Republicans could gain an even bigger advantage this November by coming out in favor of an expanded child tax credit.