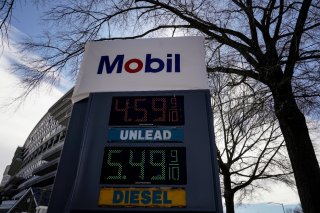 A new report is indicating that millions of Americans are cutting their overall spending due to high gas prices that have reached a nationwide average of $4.48 per gallon, according to AAA data.

CNN Business has reported that JPMorgan, in its analysis of Chase card spending data, estimated that since the war in Ukraine started in late February, non-gas consumption in the United States has fallen by approximately $9.6 billion a month. “Despite the buffer of excess savings, elevated gas prices nevertheless appear to be weighing on real consumption,” JPMorgan U.S. economist Peter McCrory wrote in the report.

The bank also noted that the impact of high gas prices on consumer spending will take time and will be more evident two or three months down the road. “This means real consumer spending growth may be choppy in months to come,” the report continued. Chase card data showed that consumers in Arkansas and Missouri have ramped up their spending at the pump the most since February, while spending in Connecticut, Massachusetts, and New York have risen the least.

Meanwhile, a separate analysis from Moody’s Analytics showed that the average American is now paying an extra $311 each month due to high inflation—an 8.2 percent jump in April year-over-year, according to data from the Bureau of Labor Statistics.

“Inflation expectations are climbing; inflation at a seasonally adjusted 8.2 percent on a year-ago basis, compared with the 2.1 percent average growth in 2018 and 2019, is costing the average household an extra $311.78 per month to purchase the same basket of goods and services as last year,” Moody’s Analytics senior director Ryan Sweet wrote. “This is a little less than last month but still a noticeable burden on households.”

Per Insider, in an effort to curb “excessive” gas prices, Congress is expected to vote this week on a bill that would allow President Joe Biden to issue an emergency energy declaration making it illegal to increase fuel and home energy prices in an “exploitative” manner.

In a press conference late last week, House Speaker Nancy Pelosi asserted that “price gouging needs to stop.” She continued, “while families are struggling to pay higher prices at the pump, oil and gas companies are recording record profits. This is a major exploitation of the consumer, because this is a product the consumer must-have.”