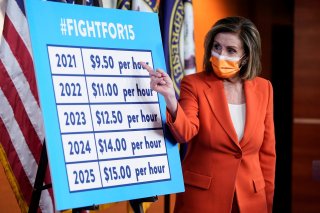 Inflation in the United States may be nearly 8 percent year-over-year—the highest seen in four decades—but it appears that millions of Americans are still trying to make ends meet on less than $15 an hour.

According to a new report released by Oxfam America, about 32 percent of American workers fall into that category. That means about 52 million workers and their families are struggling to get by on such wages.

According to Business Insider, Oxfam America’s Kaitlyn Henderson said that the low pay is “just not livable.” Moreover, such wages come amid skyrocketing corporate profits, which “are not being equitably distributed to workers.”

The report said that Mississippi, with 45.3 percent, had the highest percentage of people making less than $15 per hour.

“Where you live really determines whether or not you’re going to be able to afford the cost of living,” Henderson told Business Insider.

On the other hand, largely due to higher minimum wages, California, Washington, and Washington, D.C. had the lowest share of workers earning less than $15 an hour.

“If you were to get a job at a minimum wage position and you’re getting over $15 an hour, that incentivizes other companies to raise their wages as well because if they don’t, they can’t compete,” Henderson said, adding that the federal minimum wage has been stuck at $7.25 an hour since July 2009 and that $15 should be a “starting point” for such wages.

With so many Americans trying to live off less than $15 an hour, perhaps it’s not a huge surprise to see that 61 percent of renters nationwide can’t afford to buy a home in their city, according to Porch.com, a website that connects homeowners with local home improvement contractors.

In Los Angeles, only 4 percent of renters can afford to own a home in the city.

“The average home in the United States cost seven times the amount an average family makes in a year. That’s the highest ratio since the housing bubble preceding the Great Recession of 2007-2009, and one of the highest ratios in 70 years,” Porch researchers wrote.

“Roughly two-thirds of Americans are homeowners. But, for millions of Americans who rent and wish to buy a home, a recent real estate boom where sales are climbing and prices are skyrocketing is hardly good news,” they continue.

Meanwhile, according to a separate analysis conducted by researchers at the University of Pennsylvania’s Wharton School, it appears that low-income Americans are bearing the brunt of today’s high inflationary pressures.

“We estimate that increases in wage earnings in 2021 offset the higher cost of living due to inflation for most households with incomes between $20,000 and $100,000,” the researchers wrote.