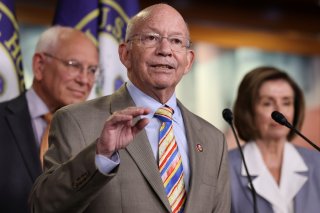 Last week, a group of senators introduced an ambitious plan to keep Social Security solvent for seventy-five years while also increasing benefits. The bill is called the  Social Security Expansion Act, and its backers include prominent senators Bernie Sanders (I-VT) and Elizabeth Warren (D-MA). The introduction came after the release of this year’s Trustees Report which found that Social Security will be able to pay out full benefits through 2034, a year later than projected in last year’s report.

“At a time when half of older Americans have no retirement savings and millions of senior citizens are living in poverty, our job is not to cut Social Security,” Senator Sanders said in a statement announcing the bill. “Our job must be to expand Social Security so that every senior citizen in America can retire with the dignity they deserve and every person with a disability can live with the security they need. And we will do that by demanding that the wealthiest people in America finally pay their fair share of taxes.”

Now, the Sanders-Warren proposal has a key endorsement. Rep. Peter DeFazio (D-OR) introduced a version of the same bill in the House of Representatives which The Senior Citizens League, a group that advocates for seniors and regularly issues reports about how inflation is affecting Social Security recipients, has backed.

“The Senior Citizens League (TSCL) is proud to support Congressman DeFazio’s Social Security Expansion Act. An extra $200 a month would go a long way in helping retirees make ends meet and extending the solvency of the Social Security program for 75 years means this benefit will pay itself forward for years to come,” Richard Delaney, chair of The Senior Citizens League, said in a statement this week.

Whether the package can get through Congress is another question entirely. Sen. Mitt Romney (R-UT),  a Republican in the Senate who has at times been willing to reach across the aisle, told reporters this week that “this bill has no chance whatsoever of receiving a single Republican vote in either House” and that “it will not be passed.”

The last major Social Security reform took place in 1983, during the Reagan administration. Last week, a former Republican senator who participated in that effort, Rudy Boschwitz, proposed his own plan for shoring up Social Security in a Wall Street Journal op-ed.

“When the Social Security actuaries and the Congressional Budget Office put numbers on these reforms, it may show that the Social Security trust fund can be made sustainably solvent without all the reforms being necessary," the former senator wrote. “If lawmakers fix Social Security, the largest of all entitlements, they would gain the credibility to fix other entitlements that underlie our budget deficits,” he added.