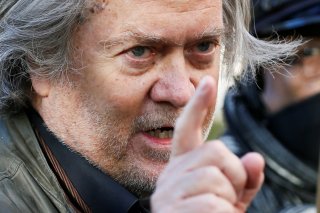 Steve Bannon, a prominent right-wing media personality who served in the Trump White House as Chief Strategist for seven months in 2017, has turned himself in for criminal contempt charges stemming from his refusal to obey a subpoena from the House of Representatives.

That subpoena concerned Bannon’s role in planning the events of January 6, 2021—a “Stop the Steal” rally attended by Trump and other high-profile allies, followed by a march on the U.S. Capitol Building that turned violent after protesters assaulted police officers and forced their way into the building. These events have been variously described as a riot, an insurrection, and a coup d’etat attempt. The House Select Committee on the January 6 Attack, led by Rep. Bennie Thompson (D-MS), subpoenaed dozens of officials who played a role in planning the initial rally, attempting to determine whether they had also encouraged or otherwise aided the storming of the Capitol.

Bannon turned himself in to the FBI on Monday, the first official so far prosecuted for refusing to comply with the committee. Mark Meadows, a former U.S. Senator from North Carolina who served as Trump’s Chief of Staff, also indicated that he would refuse to cooperate, opening the path for contempt of Congress charges against him as well. The charges can carry a sentence of up to one year in jail and a fine of up to $1,000, according to the Department of Justice.

On Tuesday, the former chief strategist appeared before a judge, where he was released without bail but ordered to surrender his passport and check in weekly with court officials. His next hearing is scheduled for Thursday; on that date, he may be asked to enter a plea of guilty or not guilty with regard to the charges.

Bannon and the other non-compliant witnesses have defended their refusal to cooperate on the basis of “executive privilege,” a legal doctrine that allows presidents to shield certain information from public release. Although President Joe Biden has explicitly refused to invoke it with regard to the subpoenaed officials, Trump’s lawyers have announced that the former president has invoked it on their behalf and sued the Justice Department to block their testimony, raising the legal question of whether former presidents are allowed to invoke it with regard to information from their administrations once they leave office.