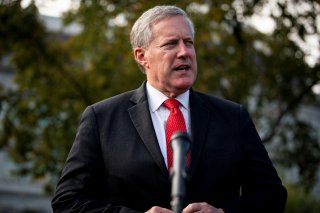 Mark Meadows, the former North Carolina congressman, leader of the House Freedom Caucus and Chief of Staff to President Donald Trump, has indicated that he will refuse to cooperate with the House Select Committee investigating the January 6 attack on the U.S. Capitol Building—potentially opening himself up to a contempt of Congress charge and criminal penalties.

Meadows, who had earlier sought to avoid testifying by claiming that his actions as Chief of Staff were protected under the doctrine of “executive privilege,” which allows a president to withhold sensitive information from the public, was notified on Thursday that the administration of President Joe Biden did not intend to assert that privilege over his testimony.

In spite of Biden’s refusal, Trump’s lawyers have indicated that he intends to invoke executive privilege, raising the question of whether former presidents have the authority to do so with regard to actions in their administrations.

The Biden administration’s legal opinion, offered by Deputy Counsel Jonathan Su, indicated that executive privilege protections could not apply to “events within the White House on or about January 6, 2021; attempts to use the Department of Justice to advance a false narrative that the 2020 election was tainted by widespread fraud; and other efforts to alter election results or obstruct the transfer of power.”

For his part, however, Meadows has indicated that he will not cooperate with the January 6 committee until a court ruling explicitly forces him to. A statement released to CNN by the former chief of staff’s lawyer claims that he “remains under the instructions of former President Trump to respect longstanding principles of executive privilege” and calls on the courts to resolve the question.

A White House official later responded to this, claiming that Meadows was “wrong on both the facts and the law.”

Meadows is one of four high-level Trump officials to face a subpoena from the committee. The other three—Kash Patel, Steve Bannon, and Dan Scavino—each initially sought the same defense, claiming that Trump’s invocation of executive privilege precluded their testimony. Patel and Bongino later indicated that they would be willing to testify; Bannon refused to do so, leading him to be held in contempt of Congress. The former chief strategist is likely to face jail time if Attorney Merrick Garland decides to prosecute him for the contempt charge.