Stimulus Checks Kept Millions of Americans Out of Poverty 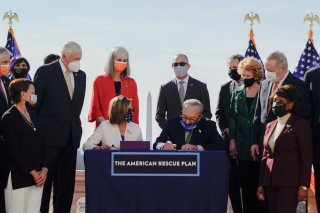 Over the two-year-long COVID-19 pandemic, millions of Americans have been beneficiaries of the three stimulus checks that Congress approved. The first checks were approved in April 2020 and December 2020 under President Trump; President Joe Biden’s American Rescue Plan funded the last round in March 2021.

An entire year has passed since the last disbursement of stimulus checks. However, even as many Americans are still struggling financially due to the ongoing health crisis and skyrocketing inflation, the White House and Congress have stayed mostly silent on this issue.

But, as personal finance expert Christy Bieber reported at The Motley Fool, there might finally be a strong incentive for lawmakers to continue offering stimulus relief to the most vulnerable Americans.

A recent analysis conducted by the U.S. Department of Health and Human Services (HHS) tried to gauge the overall impact of these stimulus payments on American households. While it did assess the general impact of the checks, the analysis devoted special attention to low-income Americans.

“Just two stimulus efforts alone were able to collectively keep 10.8 million people above the poverty level, and these two efforts would be easy to replicate for lawmakers who wish to reduce the economic struggles that many are continuing to face,” Bieber writes.

Other studies and surveys have suggested that the fallout from the ending of the enhanced credits has already had devastating consequences. One study conducted by the Center on Poverty and Social Policy at Columbia University has revealed that nearly 3.7 million more children are in poverty now. A separate survey by ParentsTogether Action found that nearly 60 percent of parents admitted that since the monthly payments came to a halt, they couldn’t afford enough groceries.

Mark Wolfe, executive director of the National Energy Assistance Directors' Association (NEADA), is pressing the government for $1,100 stimulus checks. This move is primarily due to the dramatic increase in gas prices around the country.

“The fastest and most effective way to protect vulnerable citizens from the impacts of global economic instability is to provide a direct payment through the IRS, similar to the three stimulus checks that were sent to families during the height of the pandemic,” he wrote in an op-ed for CNN Business.

“The administration should ask Congress to authorize a payment of $1,100 per household to pay for four months of higher prices going forward, and provide an option for the president to provide a second or even third check to low-and-moderate income families for an additional four months in the event that prices remain high,” he added.