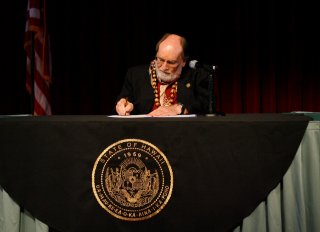 In a rare rebate program proposed by Hawaii lawmakers, taxpayers earning less than $100,000 per year and their dependents could each be on the receiving end of a $300 payment.

According to Honolulu Civil Beat, Senate Bill 514 also aims to green-light tax rebates of $100 per person to tax filers who earn more than six figures annually. “Assuming the House and Senate approve the measure in floor votes next week—which appears extremely likely—it will be the first substantive state rebate or credit of its kind since 2007,” the news outlet wrote, adding that the entire rebate package is expected to cost the state about $250 million.

Tom Yamachika, president of the Tax Foundation of Hawaii, said in a statement that he is “glad that legislators are thinking of giving some of the surplus money back to taxpayers.”

“It’s likely to be a one-time shot in the arm, but I think folks who have been suffering through the pandemic will be grateful for the help,” he continued.

Like Hawaii, several other states have jumped in to propose their own version of stimulus checks to help ease the burden of hot-running inflation that has reached a four-decade high. For example, Pennsylvania governor Tom Wolf is pressing lawmakers to disburse $2,000 checks for state families with incomes of $80,000 or less.

As reported by KDKA in Pittsburgh, Pennsylvania, Wolf has stated that he wants to use $500 million of the $2.2 billion of unspent federal Covid-19 relief money to give most Pennsylvanians a one-time state stimulus check.

“This is not some grand theoretical thing. This is something that says, could we take some of this money and actually give it to Pennsylvanians—$2,000?” Wolf said late last week during an event in Reading. “If you’re a household that makes $80,000 or less, you qualify for this. And it’s $2,000 for what? Anything you want,” he added.

Additionally, state lawmakers in Maine recently approved a budget that includes $850 stimulus checks for an estimated 858,000 residents. Similarly, Colorado gov. Jared Polis and the state's Legislature have proposed the Colorado Cashback program, which will provide eligible residents with a $400 payment later this summer.

“People are paying more for everyday items like gas, groceries, and rent through no fault of their own,” Polis said in a statement. “Instead of the government sitting on money that Coloradans earned, we want to give everyone cash back as quickly and easily as possible to provide immediate relief and empower people to do what they want to with their money,” he continued.