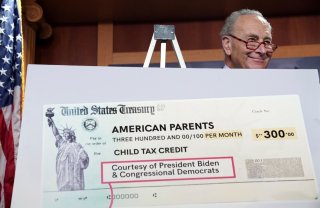 An analysis of Census Pulse Survey data from the Social Policy Institute (SPI) at Washington University in St. Louis has revealed that parents who received enhanced child tax credit payments last year did not leave the workforce as some feared and many even sought out entrepreneurship.

“The research indicates that providing parents with financial support for their children is not leading them to forgo employment income altogether,” wrote the study’s authors in the report, which was published along with Appalachian State University.

In fact, the researchers discovered that families making $50,000 or less annually actually saw their “self-employment rate increase by 2.9 percentage points following the CTC payments,” adding that “if this trend continues, it could indicate that the CTC is encouraging low-income households to pursue self-employment to make ends meet.” In all, there are approximately 300,000 additional low-income households that have transitioned to becoming small business owners.

The findings seem to discredit the concerns of Sen. Joe Manchin (D-WV), who has long contended that extending the credits would only discourage people from working. “Some policymakers and researchers worry that providing families an extra $250 to $300 a month for every child will discourage parents from working,” Stephen Roll, research assistant professor at Washington University’s Brown School and co-author of the study, told Yahoo Money.

“Our research shows that over the first five months of CTC payments, employment did not decline in any notable way among parents who were eligible for the credit. This strongly indicates that parents continued to work even as they received the CTC payments,” Roll continued. He also pointed out that “by helping ensure that families can afford the essentials, the CTC may also be helping parents pursue jobs or entrepreneurial opportunities that work better for them.”

However, such findings have not been able to sway Manchin, whose vote is key in an evenly split Senate. Without his vote, the highly contentious Build Back Better legislation, which aimed to tack on another year of the enhanced child tax credit, has been in limbo for weeks.

Top Senate Democrats, though, have continued to urge President Joe Biden to keep the enhanced child tax credit as the “centerpiece” of Build Back Better. “Without the expanded credit, nearly 10 million children will be thrown back into or deeper into poverty this winter, increasing the monthly child poverty rate from roughly 12 percent to at least 17 percent,” the senators, led by Michael Bennet of Colorado, wrote in a letter late last month.

Due to the American Rescue Plan-approved enhanced credits, approximately 35 million households with 60 million children received a $250 or a $300 payment for each child from July to December. These CTC-eligible households are now entitled to the second half of the tax credit money when they file a tax return.