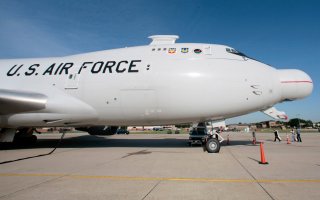 Here's What You Need to Know: The Air Force wanted lasers to shoot down ICBMs.

Missile defense is really hard. It has been compared to hitting a bullet with another bullet, and is inherently unreliable. According to Scientific American, the U.S. Ground-based Midcourse Defense ”remains the sole system designed to counter intercontinental ballistic missiles. Its 44 silo-based interceptors in Alaska and California are designed to be guided by space, ground and sea-based sensors to collide with an incoming warhead and destroy it with the force of impact.”

The GMD system has a poor track record. “Only about half of the 18 intercept tests since 1999 successfully destroyed their targets, and the test record has not improved with time: only two of the last five tests were successful—and GMD has still has not been tested under operationally realistic conditions.” Not exactly reassuring.

Space-based ICBM interceptors are another unviable alternative. Once placed in Low-Earth Orbit, space interceptors would be traveling so fast, they wouldn’t be in position for a long enough time to intercept an ICBM. In order to reliably target a missile, the space-based interceptor fleet would have to number in the thousands—making the system prohibitively expensive. But what about a laser, rather than a physical interceptor?

The U.S. Air Force decided to build on laser intercept research done in the 1980s and bought a retired Boeing 474, lopped of the nose cone, and added a ball turret—to shoot down missiles.

The laser emitted from the ball turret was powered by a chemical oxygen iodine laser, or COIL. COIL is an almost-infrared laser that is produced by harnessing chemical reactions. The setup was huge—six COIL modules were needed to power the laser, and each module weighed over 6,000 pounds.

In actuality, the laser didn’t really shoot missiles down. The laser beam’s ball turret focused on a missile and heated the outside, compromising the missile body’s integrity. One scientist likened the laser to a magnifying glass, saying, “it’s like taking a magnifying glass and burning a hole through a piece of paper, but airborne lasers do it through metal.” In-flight stress and turbulence would cause the missile to break up and fail in flight before it could reach its target.

Though powerful, the system was more effective against smaller tactical ballistic missiles which are less robust than larger intercontinental ballistic missiles. Still, range was an issue. Depending on atmospheric conditions, missiles could only be targeted from about 180 to 370 miles away, limiting the platform’s effectiveness to in-theatre operations and limiting flexibility, dooming the project.

In 2009, then Secretary of Defense Robert Gates had the following to say about the program, “The ABL program has significant affordability and technology problems and the program’s proposed operational role is highly questionable.” It was canceled shortly thereafter.

All is not lost for air-based laser weapons though. Laser research is once again being done to arm F-35s—and might arm them sooner than we think.