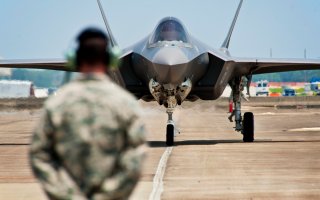 Here's What You Need to Know: Chinese and Russian air defenses are becoming more challenging to penetrate.

U.S. Air Force F-35 and F-22 stealth fighters are tracking and attacking the most advanced air defenses in the world through advanced computer simulations as part of the Air Force Test Center’s effort to replicate advanced Russian and Chinese systems.

“The true tests come night one of war, because there are some things that are tough to replicate. Some of the more advanced air defenses will be difficult to replicate. This is one of the reasons we are working on a live virtual backbone to replicate a dense threat environment,” Major General Christopher Azzano, Commander, Air Force Test Center, Edwards Air Force Base, California.

The test center performs a wide range of assessments including F-35, F-22 and B-21 air frame testing, wind tunnel assessments and flight envelope exercises. Azzano explained that the test center strategy is grounded in an advanced effort to find and harness new technologies emerging from the Science and Technology realm into emerging platforms and programs.

“We are on the verge of a new generation of capability development with so many promising new technologies. Many vanguard programs for the Air Force Research Lab feed into our Science and Technology strategy. Data and science will directly translate into rapid capability,” Azzano explained.

Chinese HQ-9 and Russian S-500 advanced air defenses increasingly draw upon new digital node networking, a wider range of frequencies and faster computer processing, making them more challenging to destroy. At the same time, computer replications are, in many instances, extremely accurate in terms of their technical ability to replicate the technical nuances of enemy systems.

Also, at places like Edwards, F-35 and F-22 stealth planes run mock-combat operations against the best available air defense technologies at live-fire ranges as well, something which can help fortify virtual engagements by adding test results and performance data.

A key portion of the testing strategy, Azzano said, is based upon the realization that modern and future battlefields will need fast data-processing and networked information to compete with increasingly dispersed and technically advanced enemy air defenses.

“Now we expect the battlefield of the future to be so dynamic, so we are looking to integrate information to provide better awareness through the power of science,” Azzao said.

A large part of this networking is grounded in making adjustments to in-flight targeting intelligence, meaning efforts to migrate away from pre-determined, fixed targets but rather rely on advanced information connectivity to adjust to new information as it arrives.

The concept is to rely upon a meshed network of sensor nodes to gather and disseminate combat-relevant information, designed in part to locate and therefore elude modern air defenses.

“In the past it was left to the end user to integrate targeting. We are now early on in development on a networked view, spread across geographical locations,” Azzano said.

Could China’s HQ-9 Missile Defense Give Russia a Run For Its Money?