Are the U.S. Marines Rethinking the Need for the F-35 Stealth Fighter? 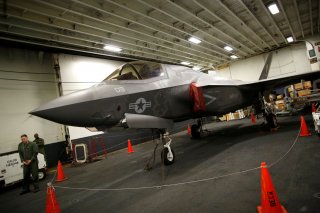 Key Point: The F-35B is a great platform. However, it also isn't the kind of quick and more stream-lined platform as some would like.

U.S. Marine Corps commandant Gen. David Berger has made it clear that the Corps could scale back its plan to buy 420 F-35 Lightning II stealth fighters as it reorganizes for naval warfare against China.

Berger long has said he wants Marine battalions to be lighter and faster-moving to help them quickly spread across bare island outposts. The F-35 with its intensive support requirements is anything but “light.” Even the vertical-landing B-model, which accounts for most of the Marines’ purchase.

Raymond “Chip” Dudderar, a retired U.S. Navy aviator and test pilot, years ago tried to warn the military about the F-35’s inability efficiently to operate from an austere base -- or from assault ships.

Dudderar later released his analysis to the public. “The F-35B airplane itself, like the Harrier before it, is perfectly capable of operating in an austere environment. It just can’t be supported there!”

Fast-movers require a lot of supplies for sustained, high-intensity combat operations. And why would you plan for anything other than high intensity? F-35B operations ashore will suck up a huge fraction of the total-force short-and-vertical cargo-lift to keep them flying. This cargo-lift has to be shared to support the very troops that the USMC has inserted ashore.

We now have competition for those cargo-lift resources. So do we starve the troops of the things they need to fight so we can fly some fancy airplanes whose mission can be better done by other equipment?

The Corps quietly has acknowledged Dudderar’s criticism. The service in recent years hasn’t talked much about the requirement to operate F-35Bs from austere airfields. Instead, the amphibious branch has stressed the plane’s ability to operate from “L-class” amphibious assault ships such as the Wasp- and America-class vessels. The Marines call this their “Lightning carrier” concept.

“When confronted with the argument regarding the onerous support burden for austere field operations ashore, the Marine Corps sometimes claims that it will do the necessary air support from smaller L-class carriers — that is, amphibious assault ships,” Dudderar wrote.

Of course, those carriers would have to be close to the shore to minimize cycle times. So the Marines must assume that the threat to these ships is minimal. That is, the “easier” scenario.

However, we also need to consider that the F-35B logistics tail is so burdensome that it even stretches the logistical capability aboard the L-class ships. Those vessels were not designed with the fuel and weapons storage for sustained operations of tactical jets at high intensity. Like the austere fields ashore, the amphibious ships will require constant replenishment — in this case from at-sea replenishment ships.

So now we have to produce a nonstop parade of replenishment ships moving in close to shore to keep the L-class ships loaded, increasing the exposure of these valuable resources to possible enemy attack. The whole concept of supply for the air support mission ashore increasingly drives us to consider providing that support from more robust stand-off platforms such as Air Force bombers, not the very needy and vulnerable F-35B.

The Marines should rely less on the F-35B for close air support and instead lean on Navy and Air Force capabilities. “Take a look at the quite capable array of new weapon-delivery platforms available to provide close-air-support today,” Dudderar wrote.

We have modern armed helos that are just as deadly, perhaps more so than jets, plus UAVs with splendid reconnaissance and weapons capabilities and no human risk. We have precise weapons that are routinely delivered from sanctuaries of position and altitude that almost eliminate ground-fire threats to the delivery platforms. Finally, there are the Navy and Air Force’s manned fighters, available 24/7 to the troops.

These various precision weapons and tactics obviate the old need for close-in weapon deliveries by the F-35, whether launched by a ship or from land.