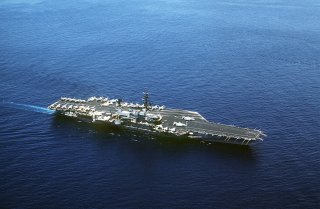 Here's What You Need to Remember: The Midways arrived just as the Navy was exploring how to adapt to the dawning jet- and nuclear-age. In 1946, an XFD-1 Phantom jet landed on the Roosevelt’s deck, the first ever planned jet-powered landing on a carrier

On March 20, 1945, the shipyard in Newport News, Virginia launched what would remain for a decade the largest warship on the planet. Named USS Midway after the decisive World War II carrier battle, she would be commissioned September 8 just a few weeks after the Japanese surrender.

Indeed, the Midway-class’s sheer size caused numerous problems. 130 aircraft proved too many to effectively coordinate, so their air wings were downsized back to 100. Their huge crews made life onboard especially crowded. And the carrier’s great weight left them riding low in the water, causing excessive seawater to slosh on deck and flood gunwales. The unwieldy vessels tended to plow through waves rather than riding above them—once resulting in one of Midway’s aircraft elevators being torn off during a storm.