The Boeing X-40 Was Decades Ahead of Its Time 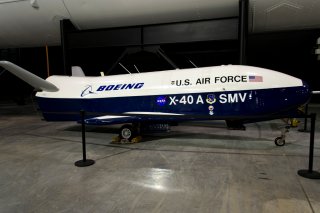 Here's What You Need To Remember:  "The X-40A had to autonomously find the runway, account for wind gusts, and track a straight course down the runway centerline. The tiny wings on the X-40A required a high angle of attack to generate lift on landing, which meant the X-40A would rapidly rotate nose-down upon braking during landing. This required a very accurate onboard sensing system."

The National Interest was able to get some insight into just how significant the X-40A was in the development of the X-37B from Darold B. Cummings, founder and president of ForzAero. Mr. Cummings holds thirty-six patents in a variety of fields. He worked in the design, analysis, fabrication and testing of air vehicles during his lengthy career.

One key point about the X-40A that Mr. Cummings would like to set straight is a longstanding myth that the unpiloted X-40, which was, in fact, built to 85% scale of the X-37 to test aerodynamics and navigation systems, utilized a drag or drogue chute.

Peter Suciu is a Michigan-based writer who has contributed to more than four dozen magazines, newspapers and websites. He is the author of several books on military headgear including A Gallery of Military Headdress, which is available on Amazon.com. This article originally appeared last month.