Brace Yourselves: Russia Is Testing Some Advanced ICBMs 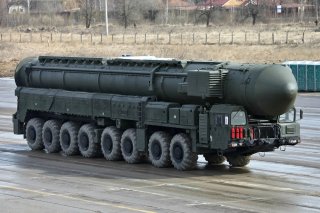 Here's What You Need to Remember: RS-24 Yars is an improved variant of the Topol-M ICBM, equipped with at least three and as many as ten multiple independently targetable warheads (MIRV), each reportedly carrying a three hundred kiloton yield.

Russia’s Defense Ministry reported that over two thousand missile troops gathered in the Irkutsk region of Eastern Siberia to practice maneuvers with road-mobile Yars intercontinental ballistic missiles. “In the course of the drills, the missile forces are practicing bringing missile systems to field positions, conducting marches, dispersing launchers with a change of field positions, their equipping and organizing camouflage measures and combat security,” read a statement issued by the Defense Ministry.

Russian news outlet TASS added that two hundred “items of materiel of a missile formation, including the most advanced types of armaments, military and special hardware,” participated in the exercises.

RS-24 Yars is an improved variant of the Topol-M ICBM, equipped with at least three and as many as ten multiple independently targetable warheads (MIRV), each reportedly carrying a three hundred kiloton yield. Yars is believed to exist in both road-mobile and silo-based variants. Road-mobile systems can be harder to detect, track, and target than their stationary counterparts, potentially making them more survivable and thus providing a key source of strategic redundancy in a major nuclear conflict. The Yars missile system is heavier than the Topol-M that it is replacing, but is transported by the same 16 x 16 wheeled chassis as its predecessor. Yars takes approximately seven minutes to launch and employs a GLONASS digital inertial navigation system.

Introduced in 2010, Russia’s Yars systems will be replaced over the coming decades by the upcoming Kedr solid-fueled ICBM system. Kedr will begin phasing out Russia’s older ICBM systems in the early 2030s.

Several other types of modernized hardware took part in the drills, including the Taifun-M “anti-sabotage” vehicle, ARS-14KM auto-filling station, and Listva remote mine clearing vehicle. The missile troops conducted their drills in conjunction with combat reconnaissance drones. “Unmanned aerial vehicles have been employed to reconnoiter combat patrol routes and detect subversive groups. The drones have helped detect subversive and reconnaissance groups at a distance of 10 km that were laying mines on roads along the routes of the columns’ movement. They have been spotted at distant approaches to the field positions and timely neutralized," the Defense Ministry statement noted.

The Kremlin has relentlessly invested in new ICBM systems over the past several decades, putting Russia’s Strategic Missiles well on track to meet or exceed an 80 percent modernization rate. The Kremlin’s growing road-mobile ICBM force is joined by increasingly sophisticated land-based systems. One of six new strategic weapons unveiled by Russian president Vladimir Putin during his 2018 annual state-of-the-nation address, the two-hundred-ton, liquid-fueled RS-28 Sarmat can travel at speeds of Mach 20. Sarmat is compatible with Russia’s new Avangard hypersonic glide vehicle and, according to Putin, is immune to interception by “any current or prospective” missile defense system.

The drills come less than one week in anticipation of the June 16 summit between President Joe Biden and Putin in Geneva, where the two leaders are expected to discuss issues relating to strategic stability and nuclear arms control.